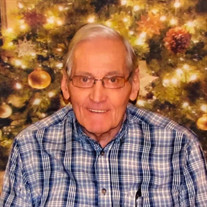 Albert (Al) Kelsch, was the second of nine children born to Bertha Mallet and John Kelsch of Brooklyn, NY. Al was born on December 27, 1932 in Brooklyn, NY and departed this life at 11:30pm on December 14, 2019 at The Missouri Veterans Home, Mt Vernon, MO. At the time of his passing he was 86 years old. As a child he soon distinguished himself as a good left handed “sandlot” baseball player earning him the nickname “lefty”. He never outgrew his love for baseball. Al left school at sixteen years of age and began working in order to support the large family. At eighteen he joined the Army and became a paratrooper, serving in Korea toward the end of the war in 1953 with the 187 Regimental Combat Team of the Eleventh Airborne Division. He served one term in the Army as did all seven of the male siblings in his family. Years later the brothers shared their military armoires and wrote a book called “Army Guys”. After the service he went to work for Penn Central/ Conrail Railroad as a night Conductor. A friend arranged a blind date with a beautiful woman named Bernadette Sullivan. Al looked no further and they were united in marriage on February 2, 1957. Al re located in New Jersey and the couple adopted two children, Suzyn and Kevin. During that time Al & Bernadette fostered a family of six brothers and sisters. On occasion Bernadettes’ nieces Patricia, Karen, Linda & Janet Schenfele all shared many adventures. In 1972 Al worked for the Frisco/ Burlington Northern Railroad and moved to Buffalo, MO. His work included living in WY, NE and CO. To stay in shape Al became interested in participating in marathon races at the age of 50 and he completed 23 marathons mostly in the lower 48 states. In 1993 He retired and returned to live in Buffalo, MO and enjoyed jogging and walking until his health no longer allowed. Al was active in St. Williams Catholic Church, Buffalo.MO and a member of Sacred Heart Parish, Bolivar,MO. Al was an Honorary Brother of The Knights Of Columbus. Al was preceded in death by his wife, Bernadette; his parents and his brothers John and Tom. He is survived by his daughter Suzyn Hale, Republic, MO; his son Kevin Kelsch, Buffalo, MO; three grandchildren Nicholas and wife Ashleigh Hale, Springfield, MO; Chayla and husband Lucas Hughes, Buffalo, MO; Austin Hale and Becka McCroskey, Springfield, MO; two Great Grandchildren, Landri and Colter Hughes, Buffalo, MO and five siblings, Matthew, NY; Michael, VA; Mary Buffington, FL; Paul,CO and Peter, NY. Al loved life. He was a man of faith and was able to receive the Holy Eucharist up until the week of his death. He was a two time Cancer survivor. De spite heart issues and a long battle of Alzheimer's his smile remained contagious and he was an inspiration to many. His kindness, gentle spirit and that sparkle in his eyes will be missed by many friends, relatives and loved ones. A Full Honors service will be held at the Springfield Veterans Cemetery on Monday December 23, 2019 at 10:00 am. In lieu of flowers the family requests donations to the Springfield Alzheimer’s Associaton

Albert (Al) Kelsch, was the second of nine children born to Bertha Mallet and John Kelsch of Brooklyn, NY. Al was born on December 27, 1932 in Brooklyn, NY and departed this life at 11:30pm on December 14, 2019 at The Missouri Veterans Home,... View Obituary & Service Information

The family of Mr. Albert "Al" G. Kelsch created this Life Tributes page to make it easy to share your memories.

Albert (Al) Kelsch, was the second of nine children born to Bertha...

Send flowers to the Kelsch family.