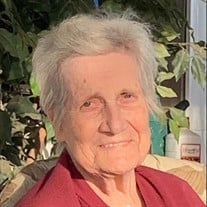 Annabelle (Smith) Earp born October 12, 1937 entered into her eternal rest on September 25, 2020 at the age of 82 years, 11 months, and 13 days. Born in Dallas County to Lloyd and Grace (Ballard) Smith, Anne remained a lifelong resident until her ill health necessitated her move to Lebanon where she resided with her daughter for the past 16 months. Preceding her in death besides her parents were three brothers, Ernest, Jerome, and George; two sisters, Virginia and Alta Mae Jones; two granddaughters, Amanda Hance, Tracy Cantrell; two nieces, Connie Keck, Deborah Hayes; and three nephews, Larry Atkisson, Wesley Atkisson and David Atkisson. She is survived by one sister, Irene Dominic of Rogers, AR, three daughters, Jolene and husband Russell Kaus of Lebanon, MO, Rhonda and husband Wesley Headings of Blue River, WI, and Saundra and husband Jamie Morris of Lebanon, MO, thirteen grandchildren, forty-four great grandchildren, many nieces, and nephews. She will be remembered by many local friends and acquaintances for her tireless efforts waiting tables in local cafes and restaurants. This was the work she loved the most and was able to provide for her three daughters while doing so. She was baptized into the local Baptist congregation after professing her faith in Christ in her youth. She also enjoyed attending many area United Pentecostal churches in later years. Her unwavering faith and love of Christ was expressed in her love of music. Many summer evenings were spent with her siblings and neighbors gathering on the front porch for an impromptu hymn sing. This love of singing and songwriting was passed down to her children and grandchildren. Mom’s great concern was the happiness and safety of her family. Her often repeated farewells included “I love you. Take care of the babies.” Her love and devotion were evident by her willingness to help in whatever way she could. Though in the eyes of the world, our little family might have been considered poor, but Mom showed us that riches are not measured by material possessions and large bank accounts. Respect, honesty, and love of one another were the cornerstones of our life. Disrespect was not tolerated in any form and was quickly and decisively dealt with. The family is grateful for the love and support shown during this difficult time. Continue to remember us is prayer as we adjust to life without Nan. Funeral services will be 2:00 p.m. Thursday, September 28, 2020 at the Cantlon Otterness & Viets Funeral Home in Buffalo, Missouri. Under the direction of Cantlon Otterness & Viets Funeral Home. Visitation from 6:00 p.m. to 8:00 p.m. Sunday September 27, 2020 in the Cantlon Otterness & Viets Chapel.

Annabelle (Smith) Earp born October 12, 1937 entered into her eternal rest on September 25, 2020 at the age of 82 years, 11 months, and 13 days. Born in Dallas County to Lloyd and Grace (Ballard) Smith, Anne remained a lifelong resident until... View Obituary & Service Information

The family of Annabelle Earp created this Life Tributes page to make it easy to share your memories.

Send flowers to the Earp family.