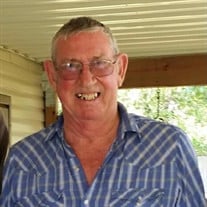 Aubrey Joe Burgess, Sr, son of Aubrey Harold and Sarah Lois (Wood) Burgess, was born July 14, 1935, in LaHabra, California. He departed this life Tuesday, December 1, 2020, at his home in Urbana, Missouri, at the age of eighty-five years, four months, and seventeen days. On July 18, 1995 he was united in marriage to Dicie Elizabeth (Corum) Burgess. Joe was preceded in death by his parents; and a son, Aubrey “Little Joe” Burgess, Jr. He is survived by his wife of 32 years, Dicie of the home; a son, Tracy Burgess of Grandview; two step-daughters, Amelia Miller & husband Michael of Urbana, MO and Diana Williams & husband Kelly of Belleville, IL; one step-son, Scott Jones of Belleville, IL; eight grandchildren; nine great-grandchildren; two brothers, Jim Burgess of Conway, MO and Don Burgess, of Winchester, KY; several nieces and nephews; as well as a host of other relatives and friends. Joe graduated from Lebanon High School in Lebanon, Missouri. After high school, he went on to join the Navy, where he served actively from 1952-1956, then in the United States Naval Reserve until 1960. After the Navy, Joe went on to work at Bowing Aircraft in Wichita, Kansas, then worked at General Motors in Kansas City for 25 years before retiring in 1988. Joe was a life member of the AMVETS Post 117 in Buffalo, MO and the Fraternal Order of Eagles Post 4010 in Louisburg, MO. Joe enjoyed fishing at Bennett Springs, playing the guitar, spoiling his grandbabies, and visiting with anyone he met along the way. His spunk and corky “Shakespeare” always made people laugh. On April 11, 2004, he joined Prairie Chapel Methodist Church. Joe was a loving husband, father, grandfather, great-grandfather, brother, uncle, and was a caring neighbor and friend. We celebrate his life and know that his family and friends will cherish the wonderful memories he created for them during his eighty-five years. Services for Joe will be made at a later date. Cremation rights were accorded under the care and direction of the Cantlon-Otterness & Viets Funeral Home of Buffalo.

The family of Aubrey Joe Burgess, Sr. created this Life Tributes page to make it easy to share your memories.

Send flowers to the Burgess family.