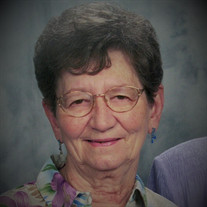 Barbara J. Brannen (Reich) went home to heaven on April 4, 2019. She was a native of Glendale, Arizona attending the local elementary schools and graduating from Glendale High School in 1960. After high school, she worked for the Mountain Bell Telephone Company in Phoenix. She married Steve Brannen in 1963. Steve served in the U.S. Navy and was assigned to Naval Air Stations in the Phoenix area and El Centro and Hanford, California. While in California Barbara worked for the local phone companies. When Steve retired from the Navy, they moved to Missouri. Barbara was a member of the Freedom Chapel Baptist Church in Urbana, Missouri. Barbara is preceded in death by her parents, Bernard and Marion Reich; her husband, Steve; their infant son, Larry Dean; her three brothers, Carroll, Freddie and Robbie Reich; and her sister, Mary Kay who died as an infant. She is also preceded by her brother-in-law, Cleland Miller. Barbara is survived by her sister, Rebecca Miller of Avondale, Arizona; and her two sons, Jeff (Cyndi) Brannen and their two sons, Quentin and Ezra of Urbana, Missouri and Edward (Crystal) Brannen of Thurmont, Maryland and their two sons, Brock and Tyler. She is also survived by two great-grandchildren. Funeral services will be conducted at 11:00 a.m. on Wednesday, April 10, 2019 at the Cantlon Otterness & Viets Funeral Home in Urbana. Escorts will be Quentin Brannen, Jeff Brannen, Ezra Brannen, Ed Brannen, Lonnie Mikes, and Marvin Coulter. Interment will be in the Mission Ridge Cemetery under the direction and care of the Cantlon Otterness & Viets Funeral Home of Urbana. Visitation will be from 5:00-7:00 p.m. Tuesday at the Funeral Home. In lieu of flowers, the family requests donations be made to the St. Jude’s Children’s Hospital.

Barbara J. Brannen (Reich) went home to heaven on April 4, 2019. She was a native of Glendale, Arizona attending the local elementary schools and graduating from Glendale High School in 1960. After high school, she worked for the Mountain... View Obituary & Service Information

The family of Mrs Barbara Jo Brannen created this Life Tributes page to make it easy to share your memories.

Send flowers to the Brannen family.