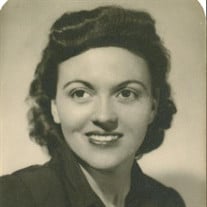 Barbara (Babe) Tate, age 102 of Buffalo, MO went Home to be with the Lord October 19, 2020. She was born August 11, 1918 in Dearing, Kansas the daughter of Orbie and Della (Phillips) Pollet. She spent her early years in Kansas and Oklahoma and in 1934 came to Missouri with her mother, sister and two brothers. They settled two miles north of Louisburg on a little acreage they called Shady Acres. She loved music and played the guitar. Her sister, Lela, played the violin and brother, Glen, played the banjo, and they played for dances. Barbara loved to dance. On February 11, 1941 she married Arnold Williams and they made their home in Springfield, Mo. Arnold died in 1967. She married Hubert Tate, from Des Moines, Iowa, on June 15, 1974. Hubert died in 1984 and Barbara was alone again. In 1988 she came to Buffalo to help care for her mother. Barbara was a lifetime member of the DAV Ladies Auxiliary, Chapter 62 in Buffalo, MO, the VFW Ladies Auxiliary Post 3404 in Springfield, MO, and the VFW Children’s Home. She was also a lifetime member of the Dallas County Historical Society. She retired from the Gospel Publishing House in Springfield after working there 35 years. Barbara was of the Pentecostal Faith and loved God. Barbara was preceded in death by her parents; her sister, Lela Smith; her brothers, Glen Pollet and Cecil Pollet; her husbands, Arnold Williams and Hubert Tate; two very special nieces, Donna Dee Whitlock and Reta Wilson; and two nephews, Calvin Pollet and Keith Smith. She is survived by two nieces, Sue Trotter & husband Jerry of Vista, CA, and Kim Smith of Springdale, AR; and two nephews, Kendal Smith of Bolivar, MO and Carl Pollet of South Coffeyville, OK. She also leaves many great nieces and nephews who were all very special to Aunt Babe. Barbara was a devoted daughter, a helpful sister, a loving aunt, a good wife and a true friend. “And we’re just sayin this cause it’s true.” Graveside services will be held at 2:00 p.m. on Thursday, October 22, 2020 in the Greenlawn Memorial Gardens Cemetery in Springfield, MO under the care and direction of the Cantlon-Otterness & Viets Funeral Home of Buffalo. Visitation will be from 5:00-7:00 p.m. Wednesday at the Cantlon-Otterness & Viets Funeral Home in Buffalo. In lieu of family requests donations be made to the VFW Ladies Auxiliary. The family has requested everyone in attendance for the visitation wear a mask and practice social distancing.

Barbara (Babe) Tate, age 102 of Buffalo, MO went Home to be with the Lord October 19, 2020. She was born August 11, 1918 in Dearing, Kansas the daughter of Orbie and Della (Phillips) Pollet. She spent her early years in Kansas and Oklahoma... View Obituary & Service Information

The family of Barbara P. Tate created this Life Tributes page to make it easy to share your memories.

Send flowers to the Tate family.