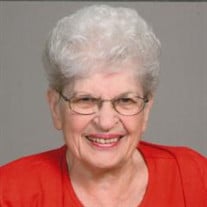 Bernice Lillian (Parris) Frantz, daughter of the late Dock & Martha “Fern” (Gilder) Parris was born on March 3, 1937 in Mount Hope, KS, and departed this life on August 26, 2019 at the Colonial Springs Healthcare Facility in Buffalo, MO. At the time of her passing she was 82 years, 5 months, and 22 days of age. Bernice was born in and spent her early years in Kansas. Her parents moved the family to Colorado for several years before moving to Casa Grande, Arizona. She graduated from Casa Grande Union High School in 1955. She met and was united in marriage to Vernon Frantz on June 12, 1955 and to this union five children were born, four of whom survive her. They made their home in Arizona for a few years before moving to Missouri. She worked at Woods Supermarket in the Meat Department for 38 years. She enjoyed sewing, cake decorating, reading, taking pictures, and traveling all over the country with Vernon. She also loved spending time with her grandkids and kept them on her day off as often as she could. Bernice was preceded in death by her husband Vernon; one daughter, Rachel Akins; her parents; and one brother and his wife, Glen & Margie Parris. She is survived by two sons, David & wife Carissa Frantz of Grove Springs, MO and Matthew & wife Diane Frantz of Louisburg, MO; two daughters, Valerie & husband Eugene George of Strafford, MO and Martha & husband Mike Lewis of Long Lane, MO; son-in-law, Jeff Akins of Buffalo, MO; one brother, Melvin & wife Diane Parris of Casa Grande, AZ; one sister, Brenneva Parris of Tempe, AZ; 14 grandchildren, Jennifer & husband Daniel Herron, Becky & husband Michael Nichols, Jessica George, Nathan George, Jessica & husband Chris Longstreet, Trina & wife Jessica Freeman, Jacob & husband Jon Barnett, Steven & wife Ashley Frantz, Adam Frantz, Andy & wife Amanda Lewis, Brandon & wife Darcy Lewis, Casi & husband Josh Burchell, Jeff Akins, Jr. & wife Ashley; and Brittney Akins and her fiancé Brady Miller; and 20 great-grandchildren. She also leaves other family members and many friends who will all truly miss her. Funeral services will be conducted at 11:00 a.m. on Thursday, August 29, 2019 at the Cantlon Otterness & Viets Funeral Home with Rev. Richard Prater officiating. Escorts will be Andy Lewis, Steven Frantz, Brandon Lewis, Jeff Akins, Jr., Adam Frantz, and Jacob Frantz. Interment will be in the New Hope Cemetery under the direction of the Cantlon Otterness & Viets Funeral Home of Buffalo. Visitation will be from 10:00-11:00 a.m. Thursday at the Funeral Home. In lieu of flowers, the family requests donations be made to the Good Shephard Hospice.

The family of Mrs. Bernice Lillian Frantz created this Life Tributes page to make it easy to share your memories.

Send flowers to the Frantz family.