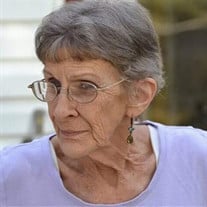 Betty Jo Hicks, daughter of the late Ova and Clara (Kidwell) Swanigan, was born on February 10, 1944 in Celt, MO, and departed this life on December 27, 2018 in Lake Ozark, MO. At the time of her passing she was 74 years, 10 months, and 16 days of age. Betty Jo or “Jody” as her Daddy called her, was reared in the Celt, MO area and attended the Tunas School. She was united in marriage to Joe Dale Hicks in 1960 and to this union two children were born, both of whom survive her. They made their home on the family farm, where they spent many happy days raising their children. Betty was a loving mother, and the best Grandma to her grandchildren. She enjoyed playing Bingo, fishing, and singing Loretta Lynn songs. She was a member of the Buffalo Church of Christ. Betty was preceded in death by her husband Joe Dale Hicks; her parents; three brothers, Johnny, Buell, and Jerry Swanigan; and one sister, Beulah Spence. She is survived by her two sons, Allan Dale & wife Catherine Hicks of Lead Mine, MO, James Lee Hicks of Buffalo, MO; three grandchildren, Charlotte Ward, Cody Hicks, and Sawnie Hicks; three great-grandchildren, Rosie Hicks, Josie Hicks, and Dalanie Jo Cline; and three sisters, Columbia Anne Barganier of Alabama, Mary Dampier of Buffalo, MO, and Judy Johnston of Springfield, MO. She also leaves other family members, her church family, and many friends who will all truly miss her. Funeral services will be conducted at 11:00 a.m. on Monday, December 31, 2018 at the Cantlon Otterness & Viets Funeral Home with Bro. Mike Pace officiating. Escorts will be Fred Miller, Mike Thiesen, Henry Thiesen, Mike Swanigan, Randy Swanigan, and Larry Jones. Honorary Escort will be Steve Jones. Interment will be in the Oak Lawn Cemetery under the direction of the Cantlon Otterness & Viets Funeral Home of Buffalo. Visitation will be from 10:00-11:00 a.m. Monday at the Funeral Home. In lieu of flowers, the family requests donations be made to the Buffalo Church of Christ.

Betty Jo Hicks, daughter of the late Ova and Clara (Kidwell) Swanigan, was born on February 10, 1944 in Celt, MO, and departed this life on December 27, 2018 in Lake Ozark, MO. At the time of her passing she was 74 years, 10 months, and... View Obituary & Service Information

The family of Mrs. Betty Jo Hicks created this Life Tributes page to make it easy to share your memories.

Send flowers to the Hicks family.