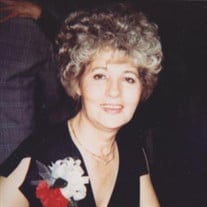 Betty “Jo” McIntire, daughter of the late William Frederick and Geraldine Mae (Yonkers) Dick, was born on September 20, 1927 in Sterling, CO, and departed this life on March 27, 2020 in Bolivar, MO. At the time of her passing she was 92 years, 6 months, and 6 days of age. Jo graduated from Sterling High School in 1945 and started Jr. College before meeting Morris “Mac” McIntire, who had just returned to the States after being discharged from the Navy. She decided school was not for her at that time and they were united in marriage in 1946. They moved to Colorado and operated several wheat sections and owned 1500 acres of grassland. After six years they decided it was time to move far away and settled on a 480-acre farm in Louisburg, MO in March of 1952. The farm had a dairy barn, so they purchased 35 head of registered Holsteins, and milked them two times a day. Their first friends were Cat and Letha Bandel, and they remained close friends and became business partners when Mac and Cat purchased the Poindexter Implement Company. They later purchased a 3-acre lot south of Buffalo and operated the Ford Tractor Company for several years. Jo started working for a local attorney, Theodore G. Scott as a secretary 6 days a week. She continued to work for him after he was elected Judge in Polk County, for close to 30 years in all. After Judge Scott retired, she worked for Judge Michael Brown in Polk County for a year before coming back to Dallas County to work for Chuck Johnson. Jo was elected Assessor in 1989 and continued her service to the county until retiring in 2001. She was also an active member of the Buffalo Rotary Club for many years. Jo was preceded in death by her husband Morris E. McIntire; her parents; two sisters, Mary Lou Dick and Sandra Peterson; and one brother, William Frederick Dick, Jr. She is survived by two sisters, Shirley Kaiser and Donna George both of Sydney, NE; one brother, Danny Dick of Hayes, KS; son, James & wife Jenny McIntire of Lacey, WA; daughter, Kathie & husband Billy Strickland of Buffalo, MO; daughter, Bonnie & husband Ross Tonti of Buffalo, MO; grandchildren, Tracy Stanton, Yvette Ling, Lance McIntire, Amanda Pierce, and Clayton Pierce; and five great-grandchildren. She also leaves other family members and many friends who will all truly miss her. Graveside services will be conducted at 10:00 a.m. on Monday, March 30, 2020 in the Maple Lawn Cemetery with Pastor Jennifer Long officiating. Escorts will be Dennis Bandel, Mike Sergeant, Steve Sergeant, George Mulderink, and Nathan Lane. Honorary escort will be Jim Young. Arrangements are under the care and direction of the Cantlon Otterness & Viets Funeral Home of Buffalo. In lieu of flowers, the family requests donations be made to the Buffalo First Christian Church.

The family of Betty "Jo" McIntire created this Life Tributes page to make it easy to share your memories.

Betty “Jo” McIntire, daughter of the late William Frederick and...

Send flowers to the McIntire family.