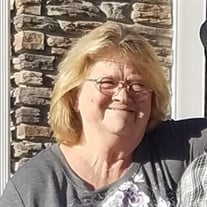 Beverly Ann Criner, daughter of the late Harvey and Betty (Bryon) Williams, was born on April 12, 1948 in Nicoma Park, OK and departed this life on August 21, 2021 in Harrisonville, MO. At the time of her passing she was 73 years, four months, and eight days of age. Beverly was raised in Nicoma Park, OK and attended school in Choctaw, OK. She enjoyed doing puzzles, playing card games, cheating at Yahtzee, and making cookies. She also enjoyed camping, fishing, cooking outdoors, and getting together for big holiday dinners with her family. She was united in marriage to Terry Criner in 1987, and they spent nearly 34 years together. Beverly was saved when she was 11 years old and loved her Lord and Savior. Beverly was preceded in death by her parents and her first husband. She is survived by her husband Terry of the home; two sons, Chris Harris of Buffalo and Terry & wife Mary Harris of Louisburg, MO; two daughters, Stacey Logan of Grove Springs and Debbie & husband Jonathan Brown of Roby, MO; one stepson, Steve Criner; one stepdaughter, Jessica & husband Patrick; one sister, Ruby Harris of Moore, OK; 14 grandchildren, Ashley, Brandon, Janessa, Kyrsten, Tanner, Derick, Makenzee, Kylie, Michael, Rodney, Justin, Cameron, Garrett, and Opie; four step-grandchildren, Zoe, Ellie, Jase, and Trenton; and several great-grandchildren. She also leaves other family members and many friends who will all truly miss her. Funeral services will be held at 2:00 p.m. on Saturday, August 28, 2021 in the Cantlon-Otterness & Viets Funeral Home with Rev. Richard Prater officiating. Escorts will be Jonathan Brown, Tanner Harris, Mitch Brockman, Derick Harris, Rick Harris, and Floyd White. Honorary escorts will be Allen White, Charles Mclauren, and Max Fletcher. Interment will be in the Pleasant Hill Cemetery under the care and direction of the Cantlon-Otterness & Viets Funeral Home of Buffalo. Visitation will be from 6:00-8:00 p.m. Friday at the Funeral Home. In lieu of flowers, the family requests donations be made to the St. Jude’s Children’s Hospital.

Beverly Ann Criner, daughter of the late Harvey and Betty (Bryon) Williams, was born on April 12, 1948 in Nicoma Park, OK and departed this life on August 21, 2021 in Harrisonville, MO. At the time of her passing she was 73 years, four... View Obituary & Service Information

The family of Beverly Ann Criner created this Life Tributes page to make it easy to share your memories.

Send flowers to the Criner family.