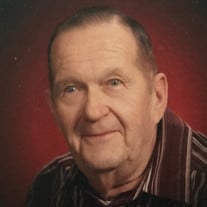 Billy Gene Cline, son of Jess and Bulah (Logan) Cline was born on August 26, 1938 in Buffalo, Missouri and departed this life on August 2, 2019 at CMH in Bolivar, Missouri after a short illness. At the time of his passing he was 80 years, 11 months, and 7 days of age. Bill worked at MFA in Buffalo for over 40 years in several departments but probably most remembered as the hardware department manager. Bill was very dedicated to his job going back after hours to meet farmers to get them medicine for sick livestock or plumbing supplies. Bill was a friend to all. In his younger years he milked cows and worked at odd jobs to help support his young family. Bill was an active member of Cherry Grove Baptist Church as long as his health would allow. He loved his Lord and Savior Jesus Christ and his family. Bill is survived by his wife Ona of nearly 60 years; son, Billy & wife Debbie Cline of Tunas, Missouri; and daughter, Terri & husband Mark Hampton of Buffalo, Missouri; granddaughters, Jaime Chandler of Springfield, Missouri and Lindsay Taylor & husband Jeremy of Deer, Arkansas; grandson, Matt Cline & wife Kara of Eldon, Missouri; and great-grandkids, Isaac and Ireland Chandler, Wyatt and Waylon Taylor, and Cole Cline. He is also survived by sisters Janice Hicks of Buffalo, Missouri, JoAnn Crowder & husband George of Elkland, Missouri, and Carolyn Brown & husband Carl of Denver, Colorado. He also had numerous nieces and nephews who will fondly remember him as “Unc.” Service will be held on Tuesday, August 6th, 2019 at Cantlon, Otterness, & Viets Funeral Home at 2:00p.m. with Pastor John Stewart officiating. Music will be Kathy Harris. Pallbearers will be Matt Cline, Jon Hicks, David Andrews, Tim Bishop, Jeremy Taylor, and Jason Krider. Honorary Pallbearers will be Isacc Chandler, Waylon Taylor, Ireland Chandler, Cole Cline, and Wyatt Taylor. Burial will follow in Maple Lawn Cemetery under the direction of the Cantlon Otterness & Viets Funeral Home of Buffalo. Visitation will be held on Monday, August 5th, 2019 at Cantlon, Otterness, & Viets Funeral Home from 6:00p.m.-8:00p.m In lieu of flowers all memorials can be made to the Cherry Grove Building Fund.

Billy Gene Cline, son of Jess and Bulah (Logan) Cline was born on August 26, 1938 in Buffalo, Missouri and departed this life on August 2, 2019 at CMH in Bolivar, Missouri after a short illness. At the time of his passing he was 80 years,... View Obituary & Service Information

The family of Mr Billy Gene Cline created this Life Tributes page to make it easy to share your memories.

Send flowers to the Cline family.