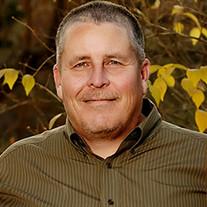 Brad Phillips was born in the night of January 8, 1970 in Springfield, Missouri, the son of Frank and Paula (Cofer) Phillips. He went to be with the Lord on Tuesday morning, January 22, 2019, while sleeping at his lifetime home in Buffalo, Missouri. Brad grew up spending his days helping on the family farm. As a kid, his parents would often outfit him with a football helmet so that he could safely learn to break horses to get them ready for show. At 12 years of age, he won the Mid-America Youth Grand Championship with his fierce competitor and family member of a horse, Travelin' Suzi. This achievement earned him a personal accommodation from DA Mallory, the then current Superintendent of Dallas County Schools. Brad learned a lot on the farm and as his Aunt Terri recalls, Brad never let her forget how she once broke his finger while working alongside him. Brad attended Buffalo Schools his entire life. He graduated from Buffalo High School in 1988. After high school, Brad pursued his passion of driving race cars, predominantly in the Bomber Class at both the Lebanon and Bolivar Speedways. His love for the sport earned him a State Championship in the Fall of 1995. Brad spent many summers enjoying the lake with his cousins and his Uncle Donald. The weekends were spent fishing, tubing, and water skiing. On January 10, 1998, Brad welcomed his first child into the world, a daughter named Rileigh Taylor. She inherited his love of horses and spent as much time learning from her dad about how to train and show them in the competitive arena. On May 8, 2001, Noah Franklin was born to Brad. Noah played baseball with his dad as the coach, and basketball, and also shared the family's love of riding and showing horses. In his adult years, Brad loved cheering on the Kansas Chiefs while attending games with his beloved nephew, Cole. He loved to hunt, camp, and he loved to fish. Brad felt the most joy when he was surrounded by his family and friends. His family will always remember how loved they felt and how he was always there when they needed someone. No matter the circumstances, Brad's family says he always put them first and dropped whatever he was doing to help them out. We will always love you Uncle Brad...Allen, Cole, Blake, and Kiley Funeral services will be held at 2:00 p.m. on Friday, January 25, 2019 at the First Christian Church in Buffalo with Pastor Tim Case and Brother Wayne Evans officiating. Visitation will be Thursday from 6:00 to 8:00 p.m. at the Cantlon Otterness & Viets Funeral Home. Pallbearers will be nephews, Allen Phillips, Blake Ramsey, and Cole Phillips. Cousins, Shawn Phillips, Eddie Phillips, and Tim Phillips will also serve as pallbearers. Honorary pallbearers will include, Brother-In-Law, Michael Ramsey and son, Noah Phillips. Interment will be in the Cedar Ridge Cemetery under the direction of the Cantlon Otterness & Viets Funeral Home of Buffalo. In lieu of flowers, the family requests donations be made to the Buffalo First Christian Church.

Brad Phillips was born in the night of January 8, 1970 in Springfield, Missouri, the son of Frank and Paula (Cofer) Phillips. He went to be with the Lord on Tuesday morning, January 22, 2019, while sleeping at his lifetime home in Buffalo,... View Obituary & Service Information

The family of Mr. Brad Edwin Phillips created this Life Tributes page to make it easy to share your memories.

Send flowers to the Phillips family.