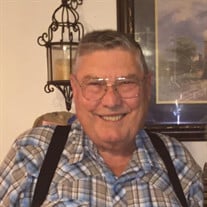 Calvin LeRoy Hobbs, 83, son of the late Rev, Everett Eli Hobbs and Katie Etna (Hill) Hobbs Baggs, was born on March 15, 1938 in Lawson, MO and departed this life on April 24, 2021 at his home near Buffalo, MO. On September 15, 1955 he married Rayberta Pauline Sage and was married for 65 years. From this union four children were born. Janice “Jan” Lynn Hubert (Pat) of Kansas City, MO, Ronald “Ronn” Dean Hobbs (Jill) of Poplar Bluff, MO, Carol Annette Love (Tim) of Buffalo, MO and Cheryl Jeanette Zebel who proceeded her dad in death in 2002. There are six grandchildren: Lindsay Allbritton (Jeremy), Dylan Love (Kylee), Ashley Saab (Jesse), Kayla Love, Stephanie Hobbs, and Alyssa Love, and five great grandchildren. Calvin is also survived by his sister, Lois Jean Bates, of St. Charles, MO and several nieces and nephews. Calvin is preceded in death by his parents, his daughter, Cheryl and two brothers, Carl and Don. He was raised in a Christian home and accepted Jesus Christ as his Savior and Lord at an early age. Calvin met Rayberta at the Baptist Church in Amsterdam, MO where Calvin’s dad was pastor. They were soon married and raised their children in a Christian home taking them to church and teaching them about God’s grace. Calvin and Rayberta started their lives together in Carrollton, MO and lived there until they moved to Buffalo in 1981. He was an oil jobber operating gas stations, and a tank wagon business in Carrollton and Brunswick, MO. and was a truck driver for Pre-Fab Transit and Heartland Express where he earned a One Million Mile Safe Driver Award. While his body will be buried in the Memorial Gardens of Memory Cemetery in Buffalo, upon his death on this earth he instantly met his Savior in his eternal home in Heaven. Funeral services will be held at 1:00 p.m. on Tuesday, April 27, 2021 in the Cantlon-Otterness & Viets Funeral Home with Pastor Ron Cannell officiating. Interment will be in the Memorial Garden's of Memory Cemetery under the care and direction of the Cantlon-Otterness & Viets Funeral Home of Buffalo. Visitation will be from 6:00-8:00 p.m. Monday at the Funeral Home. In lieu of flowers, the family requests donations be made to the Legacy Baptist Church.

The family of Calvin LeRoy Hobbs created this Life Tributes page to make it easy to share your memories.

Send flowers to the Hobbs family.