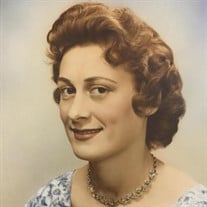 Cecile Winifred Jean Boggs, daughter of the late George Cecil and Una Winifred (Fairs) Cooper was born on February 12, 1936 in England and departed this life on February 23, 2020 at her home near Urbana, Missouri. At the time of her passing she was 84 years and 10 days of age. Cecile spent her early years and received her education at an Indian Convent due to her father being an English Officer. Some of her fondest memories growing up were coming home from India after World War II, the American soldiers dropping candy into the school courtyard, and exploring and riding her bike in and around Fort Perch Rock where her father was a Major. She later moved “across the pond” to the United States where she met and was united in marriage to Gary D. Boggs. They ran a grocery store in Cross Timbers and Preston, and later developed Applewood Lane Company. Through their business, they served individuals with developmental disabilities with residential rehabilitation and in-home health services. Cecile was fiercely devoted to her family. Her greatest joy was watching her grandsons play sports for Skyline. She was extremely proud to watch them graduate from college and go on to careers in coaching, teaching, and the medical field. She enjoyed watching the beautiful sunrises and sunsets, and would often text to say, “if you don’t hurry, you’ll miss it.” She also enjoyed watching Wheel of Fortune, taking vacations to St. John Island, watching the deer from her deck, listening to Elvis Presley, taking care of her beautiful flower garden, and the arrival of the purple martins every year. Cecile was a devoted supporter of Skyline Schools and served two terms on the school board. She loved President Trump, was a huge fan of Tom Brady, and was extremely fond of her large collection of Charlie Brown, Snoopy and the rest of the Peanuts Gang. Cecile was preceded in death by her parents; one brother, Harold Cooper; two sisters, Una and Dorothy; and one grandson, Dane Landon. She is survived by her husband Gary; two daughters, Jacqueline Ann & husband Gary Kelley and Sandra Jean Rutherford; three grandsons, Sean Donavon Kelley, Tanner Christian Kelley, and Kade Brennen & wife Annie Kelley; and brother-in-law, Ronald & wife Jean Boggs. She also leaves other family members and many friends who will all truly miss her. In lieu of flowers, the family requests donations be made to the Skyline Athletic Department.

Cecile Winifred Jean Boggs, daughter of the late George Cecil and Una Winifred (Fairs) Cooper was born on February 12, 1936 in England and departed this life on February 23, 2020 at her home near Urbana, Missouri. At the time of her passing... View Obituary & Service Information

The family of Mrs. Cecile Boggs created this Life Tributes page to make it easy to share your memories.

Send flowers to the Boggs family.