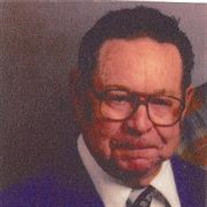 Mr. Charles "Wendell" Green 93 was born March 22, 1926 the eighth of nine children born to Alfred and Mae (Bains) Green of Urbana, MO. He passed away June 21, 2019 at Colonial Springs Healthcare Center in Buffalo, MO with his daughter at his side. He was saved at a young age while attending a revival at Hopewell Baptist Church near Urbana, MO. He became a member of that church. Wendell received his education in the Urbana and Preston schools. He graduated from Preston High School May 6, 1942. He then began farming until he joined the Army February 11, 1946. Basic Training was received at Ft. Sill, OK and advanced training at Ft. Louis, WA. He obtained the rank of Sergeant while in the service. His military occupational specialty was automotive mechanic. He maintained and drove a jeep for the company commander while at Ft. Louis. He received a Victory Medal before he departed the Army August 17, 1947. Farming was his choice of occupation when he returned to Urbana, MO after the service. He married Lora Alice Dowell, August 31, 1947. Two sons, Jim and Wayne and one daughter Jeanne were born to this union. He continued to farm and also hold down a job away from home the majority of his working career. His away from home jobs were: road grader for Dallas County, laborer on the construction of the current Dallas County Courthouse, laborer on Pomme de Terre Dam, Urbana Chevy Garage employee, feed truck driver for Urbana MFA, and propane delivery man for Skelgas in Urbana until he retired. After retirement he helped his son Jim put up hay every summer until well into his eighties. Wendell loved walking his property in rural Urbana. He was always first in the family to know when the gooseberries and blackberries were ripe for picking and if the walnuts trees would bare walnuts in the fall. Family gatherings with the Green's and Dowell's were greatly enjoyed by him. He participated in a lively game of horseshoes with the Dowell brothers when they visited. He spent time visiting with people and telling them about what it was like growing up in a large family during the depression years. In later years you would find him most mornings a the Urbana Coffee Cup enjoying breakfast, coffee and chatting. However, his main hobby was work. He instilled a strong work ethic in his children and grandchildren. Being punctual was also very important to him; always arriving early for work, appointments and events. Singing (making a joyful noise) was something you would often hear him doing. He enjoyed singing Tennessee Ernie Ford songs. He also had a sense of humor and although dementia reared its ugly head the last few years of his life ; God allowed his sense of humor to peek through the clouds of confusion. Wendell was preceded in death by his wife Lora Alice, two sons Jim and Wayne, daughters-in-law Rina and Audrey, three sisters Grace, Virgia, and Mary and five brothers Ernest, Willard, Howard, Carl and Glen. Survivors include: his daughter Jeanne (Rod) Gates, Cross Timbers, 4 grandchildren and 7 great grandchildren, Carmen (Mark) Losurdo and son Cael, Willard, Jacqulyn (Joe) Pentridge and sons Lincoln and Sawyer, Cross Timbers, Calvin (Kristy) Green and daughter Aubrey, Springfield, Nathan (Mindy) Maddux and children Gage, Alyee and Ramsey, Preston, two sisters-in-law Ruby Green, Urbana and Luanna Dowell, Buffalo and one brother-in-law Virgil (Helen) Dowell: as well as a host of nieces, nephews and friends. Funeral Services will be 11:00 Tuesday June 25, 2019 in the Cantlon Otterness & Viets Funeral Home in Urbana, Missouri with burial to follow in the Bower Chapel Cemetery in Urbana, Missouri. Under the direction of the Cantlon Otterness & Viets Funeral Home of Urbana. Memorials may be made to the Bower Chapel Cemetery Visitation will be 10:00 to 11:00 a.m. Tuesday June 25, 2019 in the Cantlon Otterness & Viets Funeral Home Urbana.

Mr. Charles "Wendell" Green 93 was born March 22, 1926 the eighth of nine children born to Alfred and Mae (Bains) Green of Urbana, MO. He passed away June 21, 2019 at Colonial Springs Healthcare Center in Buffalo, MO with his daughter at his... View Obituary & Service Information

The family of Mr. Charles "Wendell" Green created this Life Tributes page to make it easy to share your memories.

Send flowers to the Green family.