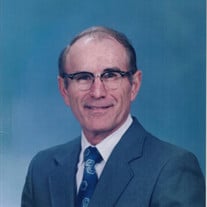 Clarence Eugene Davis, son of the late Clarence and Lena Rivers (Martin) Davis was born on April 16, 1930 in Lebanon, MO, and departed this life on November 19, 2018 at Colonial Springs Healthcare in Buffalo, MO. At the time of his passing he was 88 years, 7 months, and 2 days of age. Clarence was raised in Missouri and California. He was united in marriage to Dorothy Jean Squire on February 15, 1952 in Dallas County, MO and to this union two children were born, one of whom survives him. He did custom farming, owned and operated a canned milk route, milked cows, and owned several laundry matts. They later bought Cavalier Camper and changed the name to Bison Camper Manufacturing. He was a very hard worker and a great provider who could fix anything. He was a wonderful husband, father, and grandfather. He loved sports and was an avid St. Louis Cardinals fan. He loved coaching his son and grandsons little league baseball teams. Clarence was a member of the First Christian Church in Buffalo and was very active in his church. Clarence was preceded in death by his son Ricky Martin Davis; his parents; two brothers, Don Davis and Jack Davis; and one granddaughter, Tammy Lynne Swanigan. He is survived by his wife Dorothy of the home; his daughter, Sharon & husband Mike Russell of Bolivar, MO; one sister, Betty Hofman of Lebanon, MO; six grandchildren, Joseph, Jacob, Layne, Stacy & wife Suzy and children James and Elisabeth, Casey & wife Mukami and children Amani and Kaley, and Jason & wife Kim and children Jaida, Jailyn and Jaliea; and 11 great-grandchildren. He also leaves other family members and many friends who will all truly miss him. Funeral services will be conducted at 2:00 p.m. on Friday, November 23, 2018 at the First Christian Church in Buffalo with Pastor Tim Case officiating. Escorts will be Jason Swanigan, Stacy Swanigan, Casey Swanigan, Jeff Portman, Greg Cowden, and Shane McKinney. Interment will be in the Reynolds Chapel Cemetery under the direction of the Cantlon Otterness & Viets Funeral Home in Buffalo. Visitation will be from 1:00-2:00 p.m. Friday at the Church. In lieu of flowers the family requests donations be made to the Alzheimer’s Association.

Clarence Eugene Davis, son of the late Clarence and Lena Rivers (Martin) Davis was born on April 16, 1930 in Lebanon, MO, and departed this life on November 19, 2018 at Colonial Springs Healthcare in Buffalo, MO. At the time of his passing... View Obituary & Service Information

The family of Mr. Clarence Eugene Davis created this Life Tributes page to make it easy to share your memories.

Send flowers to the Davis family.