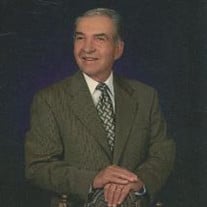 Claudie James Ashworth, son of Harry and Gladys (Spencer) Ashworth was born on November 20, 1937 in Springfield, Missouri. He departed this life on June 29, 2019 at the age of 81 years, 5 months and 9 days. He made his profession of faith at Hopewell Baptist church in Polk County at an early age. He faithfully attended church throughout his life. He strived to live his life accordingly to Micah 6:8--- To act justly and to love mercy and walk humbly with your God. He graduated from Urbana high school in 1955. Upon graduation, he moved to St. Louis and worked for McDonnell Douglas and later worked on a survey crew for MODOT in northern Missouri. With a desire to get back to home he went to work for the US Army Corp of Engineers during construction of the Pomme De Terre Dam. During this time, he was one of the men who oversaw installation and quality control of the concrete for the Dam. He entered the Army in 1960 and served in the Army reserve until being honorably discharged in 1966. He married Donna Bandy on July 17, 1964. To this union one child was born, James Allen. They lived in Louisburg until moving to the farm in 1978. They were married 54 years. After construction of the lake was completed, he continued to work for the Corp of Engineers at the lake until purchasing Nemo Landing Marina in 1972. He and Donna enjoyed and successfully operated the marina during some the busiest years in the history of Pomme De Terre Lake. After selling the marina he spent the remainder of his years on the family farm near Urbana to be with his family. He was always focused and dedicated to helping his family. Claudie was preceded in death by his parents. He is survived by his wife Donna; his son, James & wife Lora; and his grandson, Spencer. He is also survived by a host of in-laws, nieces, nephews and cousins. Funeral services will be conducted at 2:00 p.m. on Wednesday, July 3, 2019 at the Cantlon Otterness & Viets Funeral Home in Buffalo with Pastor Ron Cannell officiating. Escorts will be Erval Spencer, Frankie Spencer, Gerald Sergent, Don Pinkley, Bill Stouffer and Bill Vaughan. Honorary escorts will be Jim Spencer, Brent Formy Duvall, Jacky Payne, Mike Payne and Lawrence Bridges. Music will be provided by Chantel Carter and Pianist, Lauramae Ball. Interment will be in the Hopewell Cemetery in Polk County. Visitation will be from 6:00-8:00 p.m. Tuesday at the Funeral Home. In lieu of flowers, the family requests donations be made to The Kitchen or St. Jude Children’s Hospital.

Claudie James Ashworth, son of Harry and Gladys (Spencer) Ashworth was born on November 20, 1937 in Springfield, Missouri. He departed this life on June 29, 2019 at the age of 81 years, 5 months and 9 days. He made his profession... View Obituary & Service Information

The family of Mr. Claudie James Ashworth created this Life Tributes page to make it easy to share your memories.

Send flowers to the Ashworth family.