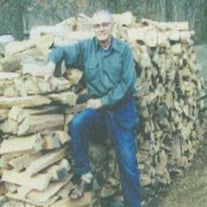 Columbus Franklin Beamon appeared on the summer’s eve of July 4th, 1921. His mom, Elsie Beamon had picked blackberries in the field that morning. Pop had gone on horse back to get the doctor. Before their return three little ones, Lloyd, Berthania, and Ollie became the only attendants to the birth. This grand event took place out on the farm in Robertsville, Missouri. Columbus Franklin’s historic name was given in honor of his paternal grandpa Columbus Franklin and maternal grandpa Frank Henderson. Over the years there were six more siblings added to the family. Without formal instruction Franklin became skilled at many tasks. His desire to succeed was strong and he worked many jobs. In his teen years he accepted Jesus Christ as his Savior. Sunday School and church have always been important in his life. He regularly attended Shiloh Baptist Church. Franklin lived sixty-four years in Robertsville, Missouri or near there. When Franklin was 17, he was called upon to help a neighbor move a table. It was there he met 13-year-old Fern Bennett in 1938. In a story book wedding, Franklin and Fern were married in the Opera House of the Keil Auditorium in St. Louis, Missouri on April 9, 1944. Franklin became a charter member of Robertsville Fire Department in 1953 and was the last living charter member. He generously dedicated his time as a volunteer for 32 years. In 1973, Robertsville Fire Department went into district with Pacific Fire Department. Franklin became a charter member of Meramec Ambulance District in 1969. He dedicated himself to both departments over a period of 16 years. In 1985 hi moved to Mountain view, AR. In 1953, he began working at Mac Donnell Aircraft. That year the DC-7 airliner made it’s first flight as the largest and most efficient of the series, it began service with American Airlines with the coast-to-coast, non-stop service. After 28 years of dedicated service Franklin retired in 1981. Franklin worked on The Mercury, with Mac Donnell Aircraft. Project Mercury recorded and studied the physiological and psychological effects of astronauts in space. NASA selected Mac Donnell to design, develop, and build the first crewed spacecraft on January 12, 1959. Mercury set the trend for United States spacecraft design in the first decade. From his union to Fern they had two children, a son George Franklin Beamon who was born on December 20, 1945, and a daughter, Patricia Ann Beamon who was born on March 26, 1947. In 1999 Franklin and Fern celebrated their 55th wedding anniversary. For many years Franklin and Fern enjoyed the beauty, the music, crafts, and people in Mountain View, AR. They decided to move to Mtn. View in 1985. Franklin’s desire to improve things continued to be strong. He regularly attended City Council, Planning and Zoning, Concerned Citizens and Chamber of Commerce. His life’s interests were God the Father, his home, family, and his community. Jesus said, “ I am the resurrection and the life. He who believes in me will live, even though he dies; and whoever lives and believes in be will never die.” John 11:25-26 Cremation rites were accorded under the care and direction of the Cantlon Otterness & Viets Funeral Home of Buffalo.

Columbus Franklin Beamon appeared on the summer&#8217;s eve of July 4th, 1921. His mom, Elsie Beamon had picked blackberries in the field that morning. Pop had gone on horse back to get the doctor. Before their return three little ones, Lloyd,... View Obituary & Service Information

The family of Mr. Columbus Franklin Beamon created this Life Tributes page to make it easy to share your memories.

Columbus Franklin Beamon appeared on the summer’s eve of July...

Send flowers to the Beamon family.