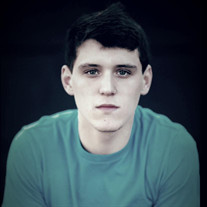 Mr. Connor Elam Gray age 21 of Louisburg, Missouri passed away Sunday, December 29, 2019 in Springfield, Missouri. He was born April 14, 1998 in Springfield, Missouri to Randy and Sandy Gray. Connor came into this world a ball of energy and left it in a ball of energy. He lit up this world. He was kind, loving, and adventurous. He was always up for a good time. He loved his family and thought the world of his little girl. He dreamed of traveling. He graduated from Buffalo High School in 2016. He briefly attended OTC. He worked construction but wanted to go back to school to study Psychology. He will be missed by so many. Conner is survived by his parents; Sandy and Randy Gray of Louisburg, Missouri, a Daughter; Atley Gray of Marshfield, Missouri, brother; Haydon Gray of Louisburg, Missouri and Grandparents; Sharon and Jon Bibler of Springfield, Missouri, Bill and Ronda Oaks of Omaha, Nebraska, and Walter and Patty Gray of Whitney, Texas. Funeral services will be 10:00 a.m. Thursday, January 2, 2020 in the Cantlon Otterness & Viets Funeral Home with Jon Bibler and Kaleb Hicks speaking. Pallbearers will be Randy Gray, Haydon Gray, Ryan Oaks, Kaleb Hicks, Jon Bibler, and Bill Oaks. Cremation rites will be accorded after under the direction of the Cantlon Otterness & Viets Funeral Home of Buffalo. Visitation will be from 7:00 to 9:00 p.m. Wednesday, January 1, 2020 in lieu of flowers memorials may be made in his daughter Atley's name.

The family of Mr. Connor Elam Gray created this Life Tributes page to make it easy to share your memories.

Send flowers to the Gray family.