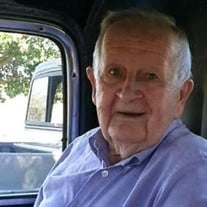 Curn Wintford “Wint” Weeks, son of the late Burbridge and Pearl Ann (Smith) Weeks was born on May 8, 1927 and departed this life on October 29, 2019 at Cox South Hospital in Springfield, MO. He was 92 years, 5 months, and 21 days old. He was married to Thelma Lucille Smith on May 4, 1946 by the Rev. Lester Slack and to this union were born 4 sons, Jerry, Ronnie, Danny, and Steve. He lived most of his life in Dallas County except for a short while when he moved the family to Illinois while he worked for Caterpiller. He worked hard to support his family and enjoyed working with his hands. He worked mostly as a carpenter or mechanic. In later years, he began woodworking and spent many hours in his shop building 80 or more cedar chests of different sizes and other wood projects. Wint was saved in an old-fashioned revival at Marlin schoolhouse near Conway in 1964. He joined Charity Missionary Baptist Church in 2010 and was baptized by Rev. Herman Coffey and was a faithful member until his passing. Wint loved the Lord and loved going to church. Wint was preceded in death by his wife of 47 years, Thelma Lucille Weeks, parents, Burbridge and Pearl Ann Weeks, 6 brothers, Fonnie Weeks who died in infancy, Oba Weeks, Jessie Weeks, Howard Weeks, Wayne Weeks, and Heber Weeks, 4 sisters, Orphie Breshears, Lausie Wingo, Dorothy Reaves, and Mamie Nixon, and 1 great granddaughter who died in infancy. He is survived by his 4 sons and their wives, Jerry and Linda Weeks of Long Lane, MO, Ronnie and Sharon Weeks of Conway, MO, Danny and Karen Weeks of Elkland, MO, and Steve and Bobbie Weeks of Buffalo, MO, 6 grandchildren, and 4 great grandchildren. He also leaves many nieces, nephews, family and friends who will dearly miss him. Funeral services will be 2:00 p.m. Saturday, November 2, 2019 in the Cantlon Otterness & Viets Chapel with Bro. Scott Reynolds and Bro. Dusty Armstrong officating. Vistation will be from 1:00 to 2:00 p.m. Saturday, November 2, 2019 in the chapel under the direction of the Cantlon Otterness & Viets Funeral Home of Buffalo Memorials may be made to the American Cancer Society

The family of Mr. Curn Wintford Weeks created this Life Tributes page to make it easy to share your memories.

Send flowers to the Weeks family.