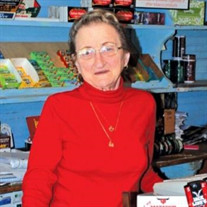 Daisy Dimple (Hanna) Caselman, daughter of the late Anderson Clayburn and Grace Violet (Brackley) Hanna, was born on December 22, 1929 in Phillipsburg, Missouri, and departed this life on January 20, 2019 at Citizens Memorial Hospital in Bolivar, Missouri. At the time of her passing she was 89 years and 29 days of age. Daisy was reared and attended school in the Long Lane, Missouri area and graduated from Buffalo High School. She was united in marriage to Aubrey Leon Caselman on December 3, 1949 in Harrison Arkansas and to this union two sons were born, both of whom survive her. Daisy lived in California for a short time while Aubrey was serving in the United States Army in the Korean War. After his return, they made their home for a short time in St. Joseph, Missouri before moving back to Long Lane. They bought the general store in Long Lane in 1954 and renamed it Caselman Grocery. She ran the store for 58 years before retiring in 2012. Daisy enjoyed fishing, square dancing, taking care of her cattle, and raising a garden. Her greatest joy was spending time with her grandchildren and great-grandchildren and making meals for her family. After retiring, she made breakfast and lunch for her boys every chance she got. After her husband Aubrey passed away, she made a special friend in Loyal Burd. They enjoyed going square dancing, antiquing, and going to sales together. Daisy was the treasurer for the Long Lane Volunteer Fire Department for over 30 years. She was also the dispatcher for the Fire Department and before 911, people would call the store in an emergency because they knew she would be there. Daisy was preceded in death by her husband Aubrey; her parents; five brothers, Clair Hanna, Irvin Hanna, Chester Buck Hanna, Les Hanna, and Jesse Hanna; four sisters, Juanita Lankford, Shirley Marlin, Dorothy Karr, and Violet Alsbach; and one granddaughter, Lacy Caselman. She is survived by her two sons, Lyle & wife Rita Caselman of Long Lane, MO and Ed & wife Linda Caselman of Long Lane, MO; one sister, Margaret Marshall; five grandchildren, Rhonda & husband David Howell, Leon & wife Tara Caselman, Chelsy & husband Garrett Grant, Loyd & wife Chelsey Caselman, Jessica & husband Nathan Nyberg; 11 great-grandchildren, Cole, Makayla, Daisy, and Rory Caselman, Aubrey and Judson Grant, Chloe and Dawson Howell, Devin and Leslie Caselman, and Willa Nyberg. She also leaves other family members and many friends who will all truly miss her. Funeral services will be conducted at 12:30 p.m. on Thursday, January 24, 2019 at the Cantlon Otterness & Viets Chapel with Pastor Terry Maddux officiating. Escorts will be Loyd Caselman, Leon Caselman, Devin Caselman, Cole Caselman, Garrett Grant, and Nathan Nyberg. Honorary escorts will be Donnie Vandruff, Wendall Cansler, Tom Howerton, Charlie Barnes, Bob Pierce, David Burd, Mike Hicks, David Howell, Steve Smith, and Roy Percival. Interment will be in the Cedar Ridge Cemetery under the direction of the Cantlon Otterness & Viets Funeral Home of Buffalo. Visitation will be from 6:00-8:00 p.m. Wednesday at the Funeral Home. In lieu of flowers, the family requests donations be made to the Children’s Miracle Network or the Long Lane Volunteer Fire Department.

The family of Mrs. Daisy Dimple Caselman created this Life Tributes page to make it easy to share your memories.

Send flowers to the Caselman family.