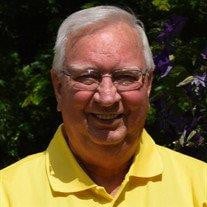 Dale Medley, son of the late Delmer and Helen (Kidwell) Medley was born on October 5, 1940 in Plad, Missouri and departed this life on January 16, 2019 in Springfield, Missouri. At the time of his passing he was 78 years, 3 months, and 10 days of age. Dale was reared in Plad and attended school in Windyville, where he graduated in 1958. He was united in marriage to Patsy Maryln Wingo on September 24, 1963 in Plad, Missouri and to this union two daughters were born, Cindy Renee and Christy Dalene, both of whom survive him. They started their life together in Kansas City, Missouri before moving to Albuquerque, NM, Oklahoma City, OK, Broomfield, CO, Champlin, MN, and Southern California for 27 years before retiring to Branson, MO. Dale and Patsy shared 47 years of marriage before she passed away in 2010. While Dale was attending his Windyville all school 50th class reunion, he was reacquainted with his fellow classmate Patricia Adams, and they were united in marriage on December 21, 2010 in Lebanon, MO. They enjoyed their eight years together, working side-by-side at Cackle Hatchery. Dale and Patricia enjoyed traveling together and seeing the country. They made trips to Niagara Falls, Yosemite, the Smokey Mountains, and Mackinaw Island. He also enjoyed hunting with his grandson Benjamin and exploring the outdoors. He loved his family dearly and cherished spending time with his grandchildren and great-grandchildren. He was an ordained deacon and served in several churches. He loved his Lord above all and spent time reading his Bible daily. Dale was preceded in death by his wife Patsy; his parents; and two brothers, Burley Medley and Warren Medley. He is survived by his wife Patricia of the home; daughters, Cindy & Dr. Samuel Ferreri of Cape Girardeau, MO and Christy & Pastor Jeff Reed of Yokohama, Japan; son, Greg & wife Lacy Hicks; daughter, Sandy & Bob Fulton of Lebanon, MO; one brother, Allen and Debra Medley of Leesburg, Alabama; grandchildren, Brad Hicks, Chet Hicks, Josh & wife Lella Fulton, Jared & Candace Fulton, Brooke (Fulton) & husband Taylor Sanders, Benjamin Ferreri, Matthew Ferreri, Johnathan Ferreri, Elizabeth Ferreri, and Christine Ferreri; great-grandchildren, Serena, Reanna, Max, Sophia, Rylan, Jackson, Jillian, Emma, Finn, and Mason; three sisters-in-law, Mary Medley, Glenda Medley and Willa Thorpe; and his extended Wingo family, Nancy & Clifton, Becky & Dave, Reba, Keith & Penny, Darlene, and Cheris & Randy. He also leaves many nieces, nephews and other family members who will all truly miss him. Funeral services will be conducted at 1:30 p.m. on Monday, January 21, 2019 at the Cantlon Otterness & Viets Funeral Home with Pastor Allen Reeves officiating. Escorts will be Benjamin Ferreri, Matthew Ferreri, Johnathan Ferreri, Josh Fulton, Jared Fulton, Taylor Sanders, and Stephan Brooks. Honorary escorts will be Randy Medley, Steve Medley, and Bob Fulton. Visitation will be from 12:30-1:30 Monday at the Funeral Home. Interment will be in the Macedonia Cemetery under the direction of the Cantlon Otterness & Viets Funeral Home of Buffalo. In lieu of flowers, the family requests donations may be made to help with Dale’s medical bills.

Dale Medley, son of the late Delmer and Helen (Kidwell) Medley was born on October 5, 1940 in Plad, Missouri and departed this life on January 16, 2019 in Springfield, Missouri. At the time of his passing he was 78 years, 3 months, and... View Obituary & Service Information

The family of Dale Medley created this Life Tributes page to make it easy to share your memories.

Send flowers to the Medley family.