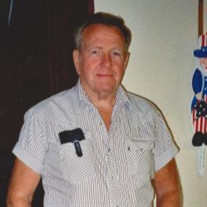 Daniel Robert Taylor was born on June 18, 1940 in rural Henry County, Missouri to George and Janet Taylor. He died at Colonial Springs Healthcare Center in Buffalo, Missouri on March 26, 2020 after a brief illness. Dan was nine years old when his family settled in Basehor, Kansas where he grew up, married, and had three sons. In 1980 Dan brought his youngest son to live with his parents who had previously moved to Dallas County. In 1983 he purchased the property where he lived and operated a truck repair shop for eleven years. Dan was a truck driver all his adult life. In 1978 he purchased and restored a 1966 Peterbilt, changing it from the original blue to black and chrome. Except for the years he ran the shop, the Peterbilt was his working truck, pulling freight on a flatbed for thirty-two years. He labeled it “Dad’s Darn’d ol’ Pete” and it was famous on the road for always being clean and polished. Dan was a gifted mechanic, able to repair any and every part in an engine or on a machine, often making the parts he could no longer buy for his truck. Dan was preceded in death by his parents; his sister, Virginia Cheek; and his three sons, Todd, Toby, and Travis. He is survived by his wife of 19 years, Stella of the home; brothers, Donnie & wife Barbara Taylor of Buffalo, MO and Ray & wife Thelma Taylor of Buffalo, MO; and two stepchildren of a previous marriage, Ethan Miller of Ozark, MO and Tanya Matthews of Florida. He also leaves many nieces, nephews, other family members, and many friends who enjoy good memories of him. Cremation rites were accorded under the care and direction of the Cantlon-Otterness & Viets Funeral Home of Buffalo. Dan was adamant that no funeral or memorial service be held and wished for his ashes to be scattered on the graves of his three sons.

The family of Daniel Robert Taylor created this Life Tributes page to make it easy to share your memories.

Send flowers to the Taylor family.