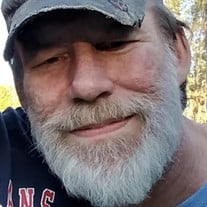 David Alan Matthews age 58 of Buffalo, Missouri was born on November 23, 1962 to Charles LeRoy and Barbara Elaine Matthews in Sterling, Illinois. He grew up and met the love of his life Tammie Sue Drain. They got married on June 28,... View Obituary & Service Information

The family of David Alan Matthews Sr. created this Life Tributes page to make it easy to share your memories.

Send flowers to the Matthews family.