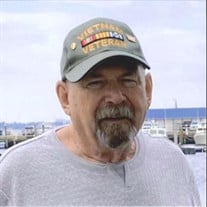 Donald Elwood Cox, 78, died November 3, 2020, at Cox South Hospital in Springfield, MO after a short illness. He was surrounded by his family whom he dearly loved and who loved him. He was born January 16, 1942, in Leavenworth, Kansas, to the late Jack and Margaret Cox. He graduated from Wichita North High School in 1960, after which he worked at General Motors. At age 25, he joined the U.S. Army, where he served in the Vietnam Tropic Lightning 25th Infantry Division in 1968-69. After two years of service to his country (1967-69) and rising to the rank of SP5, he returned home, where he continued working for General Motors. He retired from GM after 31 years. He is survived by his beloved wife of 53 years, Evaughn Elizabeth (Bowles) Cox, whom he married on May 29, 1967; one daughter, Michelle Mayfield and husband Joseph of Buffalo, MO; two grandchildren: Kyle Griffin and wife Jessi of Buffalo, MO and Madeline McKinley and husband Ryan of Aurora, MO; two great-granddaughters: Hayden and Quincy Griffin of Buffalo, MO; two brothers: Dennis Cox and wife Anne of Kansas City, KS, and Michael Cox of Camden, MO; one sister: Pamela Sestini and husband Rick of Fort Myers, FL; three sisters-in-law: Nancy Harnage of Hahira, GA; Connie Evans and husband Jerry of Tunas, MO; Susie Hook and husband Mike of Kansas City, MO; one brother-in-law: Joseph Bowles and wife Michelle of Lee’s Summit, MO, whom he all loved so much; as well as many cousins, nieces, nephews, great-nieces and nephews, and great-great nieces and nephews. He was preceded in death by one brother: David Cox, two sisters-in-law: Marilyn Olson and Kay Longwith, and two brothers-in-law: Thomas Harnage and John Longwith. His favorite pastimes were fishing in Canada with his brother, Den, son Joe, and grandson, Kyle; spending winters in Panama City Beach, FL, with his wife, where they made numerous friends at The Flamingo; and Civil War reenacting. He also loved time with his family, spending many weekends camping and boating on the lake with them. He was a member of the Disabled American Veterans (DAV), where he enjoyed the fellowship of other veterans. Donald will be cremated, and a Burial Service will be at Noon, November 9, at the Missouri Veterans Cemetery in Springfield. His brother-in-law Joseph T. Bowles will officiate the service under the direction of Cantlon-Otterness & Viets Funeral Home in Buffalo. In lieu of flowers, donations can be made to the DAV Chapter 62, PO Box 1036, Buffalo, MO 65622.

Donald Elwood Cox, 78, died November 3, 2020, at Cox South Hospital in Springfield, MO after a short illness. He was surrounded by his family whom he dearly loved and who loved him. He was born January 16, 1942, in Leavenworth, Kansas, to... View Obituary & Service Information

The family of Donald Elwood Cox created this Life Tributes page to make it easy to share your memories.

Send flowers to the Cox family.