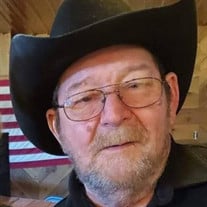 Donald Guy Webb (Donny) was born January 3, 1950 and passed away May 24, 2021. Donny was born in Doniphan, Missouri. His dad was in the military, so they traveled and moved a lot, when he was a child. They settled back in Doniphan and made their home there. Donny joined the Navy in 1968. He served 3 tours in Vietnam. While in the Navy he served on several different special teams including Search & Rescue (SAR). He served in Naviation abroad Aircraft Carriers. He earned several medals and was Honorably Discharged in 1977. He was very proud of his military days. After the Navy Donny became an owner operator in the Trucking Industry. He owned a Trucking Company in Texas where he met his wife, Brenda. Donny and Brenda were married on August 2, 1996. They shared many happy years together. They were planning to renew their vows this year for their 25th Anniversary. Donny had three children: Bryan, Cindy, and Robert. Brenda had four children: Shaun, Audrey, Lacie, and Ethan. Donny raised Brenda’s kids as his own. He loved all his children and grandchildren very much. Donny loved when he got to see his grandchildren and great grandchildren. He enjoyed telling them about his horses. He also enjoyed teasing, spoiling, and teaching them bad habits. Donny had numerous friends that he considered family. He would do anything to help a friend in need. He never met a stranger. One of his favorite pass times was being in the shop singing karaoke, drinking beer, and visiting with friends. He would tell his stories to anyone who would listen. Donny loved life and lived it to the fullest. Donny was preceded in death by his father: Barton W (Bo) Webb, mother: Dorothy Adams (Cricket), stepmother: Esther Webb, son: Ethan Durbin and two sisters. He is survived by his wife: Brenda Star Webb, three sons: Bryan Webb, Robert Webb, and Shaun Durbin, three daughters: Cynthia Webb Roberts, Audrey Fountain, and Lacie Cabrera, one brother, two sisters, Thirteen grandchildren and five great grandchildren. Cremation rites are being accorded by the Cantlon-Otterness & Viets Funeral Home of Buffalo, Missouri.

Donald Guy Webb (Donny) was born January 3, 1950 and passed away May 24, 2021. Donny was born in Doniphan, Missouri. His dad was in the military, so they traveled and moved a lot, when he was a child. They settled back in Doniphan and made... View Obituary & Service Information

The family of Donald "Donny" Guy Webb created this Life Tributes page to make it easy to share your memories.

Send flowers to the Webb family.