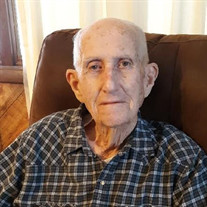 Donald Wayne Kirk was born on October 23, 1932 in Lead Mine, Missouri. Son of Mark and Mae (Reichmyer) Kirk. He passed away Tuesday, April 16, 2019 at his home in Lead Mine, Missouri. Donald graduated from Tunas High School In 1951. He was saved and baptized when he was young and a member of Pleasant Hill Baptist Church. On September 5, 1951 he married Marjorie Jean Wright who preceded him in death. They went to Kansas City where he worked for General Motors. With the farm calling him he and Marjorie purchased the farm at Celt on the Niangua River where they made their home farmed, raising cattle, hogs, and their family. In the late 60’s early 70’s he drove a truck for Appleby Boat Co. in the winter. Donald was an avid fisherman and hunter and always took his kids fishing and hunting. In 1980 they moved to their farm at Lead Mine where they continued farming. He had many other interests and was a Free Mason for over 45 years. Donald was preceded in death by his wife Marjorie; his parents, Mark and Mae; his brothers, Guy, Wayde, and Pearl; his sister, Orena Ray; and two grandsons, Mark David and Casey Wayne Schlup. He is survived by his daughter, Donna & husband Clif Smith; his sons, Bobby & wife Gwen, Wade & Jill, and Terry & wife De Anna; his grandkids, Scott Schlup, Cassie and Chris Edwards, Colson Kirk, Heather McDaniel-Becker, Tyler Hicks, Shelby and Baylie Kirk, and Niki Sokolik; seven great-grandchildren; and special friend, Loveta Eidson. Funeral services will be conducted at 10:00 a.m. on Friday, April 19, 2019 at the Cantlon Otterness & Viets Chapel with Bro. Dennis Skinner officiating. Escorts will be Carlon Clopp, Scott Schlup, Colson Kirk, Chris Edwards, Jeff Sensenig, and Sean Sensenig. Interment will be in the Kirk Chapel Cemetery under the direction of the Cantlon Otterness & Viets Funeral Home of Buffalo. Visitation will be from 6:00-8:00 p.m. Thursday at the Funeral Home. In lieu of flowers, the family requests donations be made to the Kirk Chapel Cemetery Fund.

The family of Mr. Donald Wayne Kirk created this Life Tributes page to make it easy to share your memories.

Send flowers to the Kirk family.