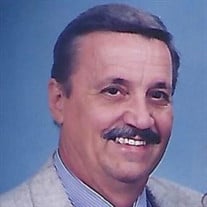 Earl Leon Eversole, son of the late Glen William Eversole and Marjorie Doris (Bridgman) Wiant was born on October 14, 1938 in Shelbyville, IL and departed this life on Wednesday, January 20, 2021 in Springfield, MO. At the time of his passing he was 82 years, three months, and five days of age. Earl was reared and attended school in Decatur, IL. After graduation he enlisted in the United States Air Force and proudly served his country. After his enlistment period, he went to work for McKesson Drug. He was united in marriage to Margy Bowley of which they had two children, Cris and Matt in Omaha NE. He was married to Cheryl Knowles Jones on January 16, 1993 and together they started a business, Broadway Home Healthcare, in 1994. They worked together for nine years, building a large and successful business before retiring in 2003. Earl was baptized at an early age at Central United Methodist Church and was an active member of the Buffalo United Methodist Church. He loved his church family and made many friends after moving to Buffalo. He was always asked to make his famous meatloaf or a batch of cookies anytime there was a meal at the church. Above all, he loved spending time with his family and grandchildren, and his favorite name was “Papa.” He also loved his dogs, even though he complained about them constantly. Earl had a unique sense of humor which he was willing to share with anyone. He was a lifelong Nebraska Cornhusker fan, and enjoyed cheering them on with close friends and neighbors. Earl was preceded in death by his parents, Glen & wife Mary Eversole and Marjorie & husband Leo Wiant; one son, Matt Eversole; and one sister, Sharon Foor. He is survived by his wife Cheryl of the home; his children, Cris & husband Scott Bohlken, Derek & wife Amber Jones, and Candace Jones; his grandchildren, Dakota, Jagger, Emma, Annie, and Madison; and his sister, Alice Eversole and dear friend Glenna Apsley. Funeral services will be held at 2:00 p.m. on Sunday, January 24, 2021 in the Cantlon-Otterness & Viets Funeral Home with Pastor Mike Hargraves and Pastor Allen Howell officiating. Escorts will be Wade Rambo, Terry Bradley, Jeff King, Aaron Burkey, Curtis Peters, and Leonard Tate. Honorary escorts will be Tony Villareal, Stacey Foor, Charles Knowles, and Russ Zahm. Visitation will be from 1:00-2:00 p.m. Sunday at the Funeral Home. In lieu of flowers, donations may be made to the Buffalo United Methodist Church at P.O. Box 134, Buffalo, MO 65622 or the Camp One Way at 1654 E 2945 North Rd., Mt. Auburn, IL 62547.

Earl Leon Eversole, son of the late Glen William Eversole and Marjorie Doris (Bridgman) Wiant was born on October 14, 1938 in Shelbyville, IL and departed this life on Wednesday, January 20, 2021 in Springfield, MO. At the time of his... View Obituary & Service Information

The family of Earl Leon Eversole created this Life Tributes page to make it easy to share your memories.

Send flowers to the Eversole family.