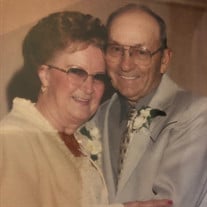 Earl “Wayne” Philbert was born on August 6, 1929 near Cross Timbers Missouri and passed away September 12, 2018 at his home in Preston, Missouri. Wayne attended Hazel Valley School for seven years before completing high school and graduating from Cross Timbers High School. “Wayne” had an incredibly strong work ethic, beginning as a child doing farm labor for $1 a day. As a young man, Wayne worked for the brush cutting crew responsible for clearing the right of way for electrical power lines near Preston. As an adult, Wayne worked various jobs including management positions in manufacturing in Kansas City, farming and owning businesses including a motel and café at the intersection of D and 54 highways; a Conoco gas station, APCO gas station, and most recently, Preston Automotive Supply, a business in which he took great pride. Wayne was saved as a young adult and spent his adult life living for his Lord and Savior. Wayne was an active member in his church, Preston Bible Baptist, serving in various roles, including trustee and choir member. Singing in the choir gave him tremendous joy. In his final days he spent a great amount of time singing his favorite hymns. Wayne was always willing to help his neighbors and often opened his gas station late at night to assist stranded motorists with no expectations of compensation. Wayne was a very community-minded individual taking great pride in his town. He played an integral role in helping develop the Preston Rural Fire Department, serving on the board of directors as well as working as a firefighter. Wayne had several hobbies throughout his life. As a young man, he was an avid roller skater spending many weekends skating with his buddies at the Wheatland Skating Rink. Later in life, Wayne was a member of several bowling leagues in Buffalo and then Nemo. Wayne loved to hunt pheasant and quail, regularly traveling to the northern United States on hunting trips with his friends and sons-in-law. Wayne was known to his family as a great “pitch” player; many hours were spent in intensely competitive family card tournaments. Wayne married the love of his life, Erma “Rife” Philbert, on September 15, 1951. He commented that he was attracted to Erma because “she was cute!” Wayne and Erma worked together side by side in business for most of the 66 years of their marriage. Wayne passed away 3 days before their 67th wedding anniversary. To this union three daughters were born: Debra, Carla, and Teresa. Wayne was preceded in death by his parents, Joseph and Alma “Miller” Philbert; a daughter, Carla Bradshaw; and brothers, Curt and Orville; sisters, Verda, Violet, Ruby, and Nina; and two brothers who died in infancy. Wayne is survived by his wife of 66 years, Erma; daughters, Debra Peterson & husband, Paul of Preston, MO and Dr. Teresa Mabary & husband, Dale of Urbana, MO; six grandchildren: Jeremy & Juli Bradshaw and son, Tanner of Clever, MO; Kurt & Kayla Friesen and children, Easton, Olivia, and Owen of Springfield, MO; Jason & Amber Peterson and sons, Lucas and Andy of Silverdale, WA; Sean & Meleshia Colfer and daughters, Isabelle and Eliana of Springfield, MO; Tyler & Amanda Montileone and children, Roman and Berkeley of Springfield, MO; and Melissa Peterson of Springfield, MO. A celebration of Wayne’s life will be held at Preston Bible Baptist Church on Monday, September 17, 2018 at 11:00 a.m. with Bro. Don Kelderhouse officiating. Music will be provided by Caitlin Brown and Glenda Wiley. Pallbearers include Geary Shaddox, David Burns, Jeremy Bradshaw, Kurt Friesen, Tyler Montileone and Jason Peterson. Honorary pallbearers include great-grandsons: Tanner Bradshaw, Easton Friesen, Lucas Peterson, Owen Friesen, Andrew Peterson and Roman Montileone. Visitation will be Sunday, September 16, 2018 from 4:00 to 6:00 p.m. at the Cantlon Otterness & Viets Funeral Home in Urbana. Burial will be in Bowers Chapel Cemetery north of Urbana. In lieu of flowers, the family requests donations be made to the CMH Hospice. Condolences and online register book entries may be left at www.cantlonotterness.com. The family would like to thank the CMH Hospice team for their amazing kindness and hard work during Wayne’s illness. They are truly angels of mercy. The following is a tribute to Wayne from his grandchildren: An honorable life, one of dignity and discipline. A life of conservation, full of repairs instead of upgrades, of faith, hard work and self-control. One that didn’t beg attention but quietly and consistently moved forward in the direction of integrity. That’s What our grandpa’s 89 years look like to us today. There’s a lot to be learned from the children of the depression, the soldiers of Korea a self-made generation, “our greatest generation.” The loss is huge, but so is his legacy. We are proud to be Wayne Philbert’s grandchildren. He will be greatly missed.

The family of Mr. Earl "Wayne" Philbert created this Life Tributes page to make it easy to share your memories.

Send flowers to the Philbert family.