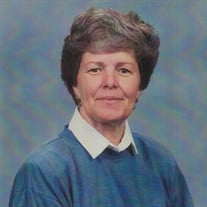 Eileen Kay “Wilcox” Welch was born February 21, 1944 to Jesse Ray and Anise Kathryn (Cross) Wilcox in Munsey, Indiana. She passed away Sunday morning February 17, 2019 at her home in Urbana, Missouri just four days shy of her 75th birthday. Eileen spent her early years in Indiana; her family eventually settled near Preston Missouri. Eileen attended Skyline High School. In 1961, she was united in marriage to Donald Mabary. Four sons were born to this union: Donald “Dale”, Danny, Jerald and Darryl, all of whom survive her. Eileen had a very strong work ethic which she passed down to her children. She worked in the Urbana Head Start program in the 1960’s. Later, she spent several years as a teller at the Bank of Urbana as well as City Clerk for the town of Urbana. Prior to her retirement, Eileen was manager of the Coffee Cup Restaurant in Urbana. She is still very fondly remembered by her customers who quickly became her friends. Eileen married Merl Welch on September 11, 1987. They owned and operated “Greenridge Shorthorns” on their ranch near Urbana. Eileen had a very competitive nature. She enjoyed watching all types of sporting events from watching her sons play high school sports to supporting the St. Louis Cardinals. However, she was most passionate about her KU Jayhawks college basketball team. Even when she was very ill, she looked forward to watching her beloved Jayhawks. She was recently heard saying, “They better get with the program if they plan to win it all!”. Eileen was also an avid card player. She spent many hours playing “Pitch” with family and friends, laughing out loud when she caused an opponent to “go set”. Eileen professed her love for Jesus Christ and was confident in her salvation. She had stated, “When it is my time, I pray God will just take me, and I will be at peace”. When her health permitted, Eileen enjoyed going to the McCarty Senior Center in Wheatland to eat and fellowship with friends. Eileen was an amazing cook and, as her family can attest, she could make a feast from very little. Keeping meals on the table for four growing boys was no small task but she always had wonderful meals for her family and whoever happened to be at her home at mealtime. Eileen was preceded in death by her mother, Anise Kathryn, brother Rob Wilcox, and her beloved step-mother, Dorothy “Dot” Wilcox. She is survived by her husband, Merl of the home; sons and daughters-in-law: Donald “Dale” and Teresa, Jerald and Jan of Urbana; Danny of Louisburg; and Darryl and Cindy of Tunas. Other survivors include grandchildren and great-grandchildren: Eric, Yoshie, Josiah and Tia Garrettson Ft. Meade, Maryland; Kurt and Kayla (Mabary) Friesen, Easton, Olivia and Owen, Springfield, Missouri; Tyler and Amanda (Mabary) Montileone, Roman and Berkeley, Ozark, Missouri; Tyler, Loren and Makinley Mabary, Braten and Emilee Mabary, and Kale Mabary, all of Urbana. Also surviving her are step-children Cheri Culbertson, Kathi Schilling, Brad Welch, David Welch and Michael Welch. Michael was very involved in caring for his father and Eileen as her illness progressed for which the family is very thankful. Also surviving are siblings: Juanita Weber, Suzan Thompson, Noel and JD Wilcox, all of Florida and Gloria Simmons, Urbana; and her father Jesse Ray Wilcox of Florida. The family would like to thank everyone for their support during Eileen’s illness and passing. The love and support of friends and family will never be forgotten. Funeral services will be conducted at 2:00 p.m. on Wednesday, February 20, 2019 at the Cantlon Otterness & Viets Funeral Home with Bro. Don Kelderhouse officiating. Escorts will be Tyler Montileone, Monty Rucker, Tom Spears, Eric Garretson, Tyler Mabary, Braden Mabary, Kurt Friesen, and Kale Mabary. Interment will be in Bower Chapel Cemetery under the direction of the Cantlon Otterness & Viets Funeral Home of Urbana. Visitation will be from 1:00-2:00 p.m. Wednesday at the Funeral Home. In lieu of flowers the family requests donations be made to the Head Start program or the St. Jude’s Children’s Hospital.

The family of Mrs. Eileen Kay Welch created this Life Tributes page to make it easy to share your memories.

Send flowers to the Welch family.