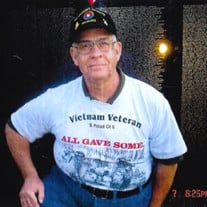 Elbert William Martin passed away on April 27, 2019 after a lengthy illness. Elbert was born October 7, 1946 to Elbert and Gladys Martin in Buffalo Missouri. He attended school and graduated from Buffalo. He enjoyed playing basketball, football and baseball for the Bison’s. He made many lifelong friends from these years. Elbert married Helen Marie (Gregg) Martin on July 22, 1966 in Charity, Missouri. To this union he has one daughter Lora Ann (Martin) Brooks and one son Mickey Lynn Martin. He was most proud of his three grandsons Alexander Brooks, Ryan Brooks and Cooper Martin. They made Papa’s last year’s very special. He served in the United States Army from April 1967 to December 1968 having made the battlefield rank of Sergeant. He was injured by a landmine on Valentine’s Day of 1968. During his service he was very honored to have earned his Combat Infantry Badge and the Purple heart. The Vietnam War would help shape his character and define the ideals of honor, duty and sacrifice that would be forever part of him. He spent 33 years working for the United States Post Office and was a very active member of the American Postal Workers Union and serviced as a Steward and fought for workers’ rights. During his tenure he made lasting friendships, stories and jokes that he enjoyed telling. He was very proud of his brick “package” that was delivered all over downtown Springfield, but always would find its way back to him. Elbert was committed to service. He was on numerous boards and coached both of his children in any sport they showed interest in. The impact on the lives of all the children he coached is immeasurable. He always loved to see his “kids” (as he referred to the players on his teams) and enjoyed the fond memories they shared with him as adults. He spent his retirement going to auctions and spending as much time with his grandkids as he was allowed. He loved them all and would do anything for them. Elbert is preceded in death by his parents Elbert and Gladys; his siblings Leland, Bob, Maxine, Eugene, Imogene, Howard, Bill, Dorothy, Kenny, and Albert. He is survived by his wife Helen; daughter, Lora Brooks (husband Jason); son Mickey Martin (wife Tracie); grandsons Alexander, Ryan and Cooper; siblings Anna Lou Bartee and Joseph Martin; and several nieces and nephews. Funeral services will be conducted at 2:00 p.m. on Wednesday, May 1, 2019 at the Cantlon Otterness & Viets Funeral Home with Pastor David Van Bebber officiating. Interment will be in the Bethel Cemetery under the direction and care of the Cantlon Otterness & Viets Funeral Home of Buffalo. Visitation will be from 1:00-2:00 p.m. Wednesday at the Funeral Home. In lieu of flowers, the family requests donations be made to the Bethel Cemetery Fund.

Elbert William Martin passed away on April 27, 2019 after a lengthy illness. Elbert was born October 7, 1946 to Elbert and Gladys Martin in Buffalo Missouri. He attended school and graduated from Buffalo. He enjoyed playing basketball,... View Obituary & Service Information

The family of Mr. Elbert William Martin created this Life Tributes page to make it easy to share your memories.

Elbert William Martin passed away on April 27, 2019 after a lengthy...

Send flowers to the Martin family.