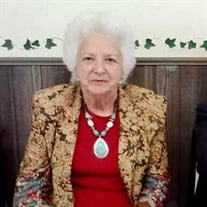 Elizabeth Jewell (McCaslin) Mathews was born on January 30, 1941 in Buffalo, MO, the daughter of August and Elsie (Owens) McCaslin. Liz wed Chester Mathews on July 25, 1959 in Miami, OK. The couple then resided in Kansas City until 1976 when they came to Charity, Missouri and ran Charity School House Antiques out of the old Charity School until Chet’s passing in 2006. Liz married Don Landreth in 2007, and together they moved to Buffalo, where they lived until Don’s passing in 2019. After being diagnosed with Alzheimer’s earlier this year, Liz was still able to stay in her home in Buffalo until she suffered a severe stroke on September 21. She was transported to St. Luke’s Neuroscience Unit in Kansas City, where she remained until her passing on October 4. At the time of her passing she was 79 years, eight months, and four days of age. The family wishes to extend much gratitude to Ardith Slater, Connie Mathews, Reita Mathews, Sharon Brown, and Naomi Lampke for helping with Liz’s in-home care the last few months of her life. Liz told them all, as well as much of the family, she was ready and wanted to go home to see Jesus. Liz was preceded in death by her husband of 46 years, Chet; her parents; her second life companion, Don; and one sister, Shirley Weeks. She is survived by two brothers, Oren & wife Donna McCaslin of Phillipsburg, MO and Carl & wife Patti Quisenberry of Buffalo; and a host of nieces, nephews, cousins, and friends who will all sadly miss her. Funeral services will be held at 2:00 p.m. on Wednesday, October 7, 2020 in the Cantlon-Otterness & Viets Funeral Home with Bro. Dusty Armstrong officiating. Escorts will be Russell Weeks, Russ Weeks, Zachary McCaslin, Greg Armstrong, Zane McCaslin, and Ben Quisenberry. Honorary escorts will be Doug Mathews, Dwight Mathews, James Mathews, and Phil Legan. Interment will be in the New Hope Cemetery under the care and direction of the Cantlon-Otterness & Viets Funeral Home of Buffalo. In lieu of flowers, the family requests donations be made to the New Hope Church in Long Lane.

Elizabeth Jewell (McCaslin) Mathews was born on January 30, 1941 in Buffalo, MO, the daughter of August and Elsie (Owens) McCaslin. Liz wed Chester Mathews on July 25, 1959 in Miami, OK. The couple then resided in Kansas City until... View Obituary & Service Information

The family of Elizabeth Jewell "Liz" Mathews created this Life Tributes page to make it easy to share your memories.

Send flowers to the Mathews family.