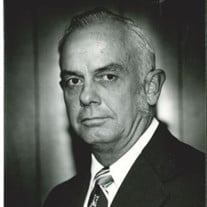 Ernest Austin Reed, son of the late Frank and Vesta (Leinard) Reed was born on April 30, 1932 in Peru, IA and departed this life on March 10, 2020 in Buffalo, MO. At the time of his passing he was 87 years, 10 months, and 9 days of age. Ernest spent his early years in Peru, IA before his family moved to Buffalo, MO when he was 10. Shortly after graduating from Buffalo High School, he enlisted in the United States Army and proudly served his country. After his time in the service, he went to work for the Continental Phone Company as a lineman and worked his way up to Central Office Repairman before he retired. He was united in marriage to Virginia Slater on August 14, 1957 in Red Top, MO. Ernest loved the outdoors, whether he was hunting, fishing, frogging, or working in his garden. His greatest joy was spending time with his family, fellowshipping with them around a good meal. Ernest was a member of Calvary Chapel Freewill Baptist church, and loved their Church family. His love of fishing allowed him to provide fish for the annual fish fry at the Church for many years. Ernest was a friend to all and would help anyone he could without expecting anything in return. Ernest was preceded in death by his wife Virginia; his parents; two brothers, Phillip Reed and Lloyd Reed; and two sisters, Dorris Stanton and Alice Ovitt. He is survived by two sons, Calvin & wife Sharon Stoops of Bolivar, MO and Dennis & wife Christina Reed of Marshfield, MO; daughter, Gwenna McClease of Seattle, WA; five grandchildren, Amanda Stoops, Kyle Stoops, Ian & wife Garmyn McClease, Brandy McClease, and Colten Reed; five great-grandchildren, Krisha Chiasson, Hayden Chiasson, Alia Chiasson, Anjell Chiasson, and Connor McClease; one great-great-grandchild, Carson Quiten; and two brothers, Claire & wife Shirley Reed of Buffalo, MO and Dale Reed of Buffalo, MO. He also leaves other family members and many friends who will all truly miss him.

The family of Mr. Ernest Austin Reed created this Life Tributes page to make it easy to share your memories.

Send flowers to the Reed family.