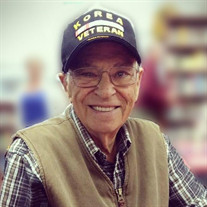 Eugene L Gravelle was born on January 26th, 1933 to Arthur and Martha (Nasbe) Gravelle in Fitchburg, Massachusetts. He departed this life on March 25, 2019 at 86 years of age. Gene served in the Army in the Korean War from November 21, 1951 to November 19, 1953 with the rank of Corporal. He was a devout Christian man who loved the Lord and led his family along with Sharon, his wife of 47 years. His saying was, “I may be getting old, but I refuse to grow up”, which with his fun-loving spirit, he stayed true to until the end. He had a passion for his family and was most happy when family was together. Gene and his family created many memories camping, fishing, hunting, four wheeling, boating, and often hanging out singing, as he accompanied them on his guitar. He was a lover of music and his family is following in his footsteps and will carry on his legacy. Anytime someone was in need, Gene was there for them. He put others before himself and did it all with a willing heart. God blessed him with extraordinary mechanical skills, which he often used to help others, particularly his church family. He will forever be missed and never forgotten. Gene was preceded in death by his parents and his only brother, Camille, and six of his eight sisters Florence (Flo), Rita, Constance (Connie), Cecile, Gloria (Glory), and Theresa. He is survived by his sisters Honerine (Honey) and Eunice; his wife Sharon Gravelle of the home; his sons Gene Jr. of Maine and Jacob Gravelle of Arizona and his daughters Monica Stephens of Florida, Lisa Gravelle of Buffalo,Missouri and Amy Jones of Stoutland, Missouri; his six grandchildren Britney Cox, Justin Stephens, Kristin Jones, Shayla Jones, Aliyah Jones and Kyle Jones. He leaves one great-grandson Maverick Cox. He also leaves many cousins and wonderful friends who will miss him dearly. Funeral services will be conducted at 11:00 AM on Saturday, March 30, 2019 at the First Baptist Church in Buffalo with Pastor David Van Bebber officiating. In lieu of flowers, the family requests donations be made to the First Baptist Church.

Eugene L Gravelle was born on January 26th, 1933 to Arthur and Martha (Nasbe) Gravelle in Fitchburg, Massachusetts. He departed this life on March 25, 2019 at 86 years of age. Gene served in the Army in the Korean War from November 21, 1951... View Obituary & Service Information

The family of Mr. Eugene Leo Gravelle created this Life Tributes page to make it easy to share your memories.

Send flowers to the Gravelle family.