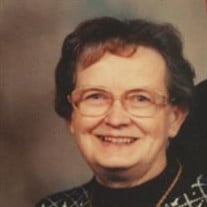 Frances Irene Tribon, daughter of the late James Michael & Constance (Laurents) Hofacre, was born on February 19, 1931 in Clearwater County, Minnesota and departed this life on October 6, 2020 in Buffalo, Missouri. At the time of her passing she was 89 years, seven months, and 17 days of age. Frances was raised in Bagley, MN. She attended high school and lived in a dorm while attending the Northwest School of Agriculture in Crookston, MN. A few years after she finished her schooling she was united in marriage to Herman Tribon and to this union three daughters were born, all of whom survive her. Together they lived in Iowa on the Tribon farm while he ran the farm for his mother. A while later they moved to Foose, MO where they started their family. While the children were young, they moved to Buffalo where they finally settled and raised their family. They attended Buffalo United Methodist Church, sang in the choir, and participated in most Church activities. Frances was a caretaker, babysitting and serving as a foster parent for many children. In her free time she enjoyed spending time with her family, rug making, and gardening. Her greatest joy was loving the children she was around. Frances was preceded in death by her loving husband of 49 years, Herman Tribon; one brother, James Hofacre; three sisters, Adeline Anderson, Patricia Haluptzok, and Zella Kemp; one son-in-law, Darrell Dill; and her parents. She is survived by her three daughters, Sharon Dill, Karen Witt, and Julie Chastine; seven grandchildren; five great-grandchildren; five great-great grandchildren; one sister-in-law, Ruth Hofacre; and one brother, Richard Hofacre. She also leaves behind several nieces, nephews, friends and other family members whom she loved very much. Funeral services will be conducted at 2:00 p.m. on Thursday, October 8, 2020 at the Grace Community United Methodist Church with Pastor Mike Hargraves officiating. Escorts will be David Chastine, Christopher Dill, Rodney Harrill, Derrick Harrill, Blake Gilpin, and Chris Abercrombie. Honorary Escorts will be Wayne Holt, Eric Otterness, and Kenneth Lovell. Interment will be in the Maple Lawn Cemetery under the care and direction of the Cantlon-Otterness & Viets Funeral Home of Buffalo.

Frances Irene Tribon, daughter of the late James Michael & Constance (Laurents) Hofacre, was born on February 19, 1931 in Clearwater County, Minnesota and departed this life on October 6, 2020 in Buffalo, Missouri. At the time of her passing... View Obituary & Service Information

The family of Frances Irene Tribon created this Life Tributes page to make it easy to share your memories.

Send flowers to the Tribon family.