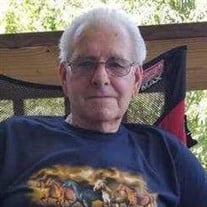 Frank Earl Pierce was born on November 15, 1935 to Hubert & Lela (Franklin) Pierce at their home near Long Lane, Missouri. He departed this life on March 22, 2019 at the age of 83. Frank graduated from Windyville High School in 1953, and that is where he met the love of his life, Opal Bailey. They were married on February 12, 1955, and then their children Becky, Regina, and Danny made a family. He worked for the Independent Stave Company for 40 years, was a big horseman with the best being his running horse Pogo, fished anywhere he could, and caught mounting size fish in Canada. He also loved to hunt and travel and was an avid outdoorsman. His wife, children, grandchildren, and great-grandchildren all held a special place in his life. He was always teaching them how to fix something, make something to better their lives, and how to take care of their families. Frank was preceded in death by his wife Opal; his parents; one daughter, Becky Nicks; great-grandson, Lucas Nicks; and his brother, Bill Pierce. He is survived by his daughter, Regina & husband Wayne Johnson; grandson, Anthony & wife Alexis Johnson; his son, Danny Pierce; grandson, Dalton & wife Bri Pierce; granddaughter, Tori Jo Pierce; grandson, Matt & wife Ashley Nicks; great-grandchildren, Lilly, Karlie, and Brett; grandson, Ryan & wife Stephanie Nicks; great-grandchildren, Jason, Emerson, Jack, and Evie; brother, Bob Pierce & family; sister, Betty Long & family; his brother Bill’s family; and his son-in-law, Danny Nicks. He also leaves other extended family and the Bailey family, many friends, and neighbors. Funeral services will be conducted at 11:00 a.m. on Wednesday, March 27, 2019 at the Cantlon Otterness & Viets Funeral Home with Pastor Matt Taylor officiating. Escorts will be Kevin Pierce, Rhett Elia, Travis Pierce, Logan Pierce, John Long, Al Franklin, and Travis Rice. Honorary escorts will be his grandsons, Matt Nicks, Ryan Nicks, Anthony Johnson, and Dalton Pierce and his great-grandsons, Brett Nicks, Jason Nicks, and Jack Nicks. Interment will be in the Cedar Ridge Cemetery under the care and direction of the Cantlon Otterness & Viets Funeral Home of Buffalo. Visitation will be from 9:30-11:00 a.m. Wednesday at the Funeral Home. In lieu of flowers, the family requests donations be made to the Cedar Ridge Cemetery Fund.

Frank Earl Pierce was born on November 15, 1935 to Hubert & Lela (Franklin) Pierce at their home near Long Lane, Missouri. He departed this life on March 22, 2019 at the age of 83. Frank graduated from Windyville High School in 1953,... View Obituary & Service Information

The family of Mr. Frank Earl Pierce created this Life Tributes page to make it easy to share your memories.

Send flowers to the Pierce family.