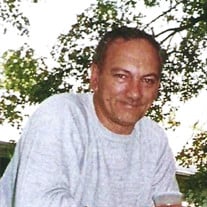 Frederick Andrew Van Middlesworth went home to be with his beloved wife, Carolyn on January 12, 2021, after her passing on November 12, 2020. He was born on August 19, 1946 to Aranka “Goldie” and Frank B. Van Middlesworth in North Brunswick, NJ. Fred had many challenges in life but faced them all with strength and courage. In 1961 he became a second parent to his 5 younger siblings when their mother passed away from cancer. He made sure homework was done, kids were clean and fed, and everyone behaved. On June 25, 1964 he met the love of his life, and the woman whom he would share his life journeys with. He and Carolyn were married on July 25, 1964. In 1965 he enlisted in the United States Marines along with his brother Frank. He did his training at Camp LeJeune NC, and Camp Pendleton, California. He was awarded the Purple Heart twice. Fred loved music, his favorites being Johnny Cash, Johnny Maestro, Jay Black, and Hank Williams. When their first child was born in 1969, he was named Robert Franklin, after Carolyn’s brother and Fred’s dad. In 1971 when their daughter was born, she was named after his other favorite singer, Connie Francis. Fred loved to dance and was a master builder and master mechanic, all self-taught. He spent many hours alongside his son Rob and grandson Steven, and left behind his knowledge of being a great mechanic. Most of all, Fred was a generous man. He and Carolyn raised their children, then made the decision to raise their grandchildren. He always loved bragging about the accomplishments of his son and grandchildren. Fred moved his family from his lifelong home in NJ, to Missouri in 2004 to start a new life. He purchased a home and spent much of his time making it his and Carolyn’s dream home. He took pride in all he did and was meticulous. When Carolyn took ill with cancer in 2016, he was her caregiver right until he too was diagnosed with cancer. He is survived by his children, Robert Van Middlesworth & wife Jeanne of Whiting, NJ and Constance of Urbana, MO; grandson, Steven Van Middlesworth of Buffalo, MO; and granddaughter, Samantha Umfleet & husband Michael of Louisburg, MO; his brothers, William Van Middlesworth of Massena, NY, Frank Van Middlesworth & wife Candy of Urbana, MO, and Andrew Van Middlesworth of Henrico, VA; and one sister, Margaret & husband Ron DeNorscio of Vacaville, CA. He also leaves many nephews, nieces, cousins, and friends. He was preceded in death by his wife Carolyn; his sister, Janet in 1996; his brother, Robert in 2015; and his sister, Lily in 2017. Fred was a good man; he would give away anything he had to anyone that needed it or asked for it. He never forgot anyone’s birthday and had the most beautiful handwriting. Fred was lost when Carolyn passed. He kept asking “now what am I going to do?” So now he knows… he is dancing with his wife, spending time with his family, and knowing that there truly is a place called Heaven. Rest well, we all love you! Funeral services will be held at 2:00 p.m. on Friday, January 22, 2021 in the Cantlon-Otterness & Viets Funeral Home. Escorts will be Steven Van Middlesworth, Rob Van Middlesworth, Ryan Reed, Michael Umfleet, Brian Van Middlesworth, and Jessie Van Middlesworth. Interment will be in the Maple Lawn Cemetery under the care and direction of the Cantlon-Otterness & Viets Funeral Home of Buffalo. Visitation will be from 12:00-2:00 p.m. Friday at the Funeral Home. In lieu of flowers, memorials may be made to the American Cancer Society.

The family of Frederick A Van Middlesworth created this Life Tributes page to make it easy to share your memories.

Frederick Andrew Van Middlesworth went home to be with his beloved...