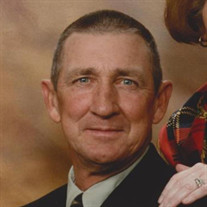 Galen Dean Lindsey was born on May 6, 1947 in Urbana, MO. He was the second son of seven children born to Henry Wayne and Martha Jo (Edde) Lindsey. He passed away on Saturday, February 19, 2022 with his wife Jeanne by his side. At the time of his passing he was 74 years, nine months, and 12 days of age. Galen grew up on a farm outside Urbana and never ventured very far away. He graduated from Skyline High School and attended Warrensburg College but stopped after one year to help his dad with the mobile feed mill business after a minor farm accident. Galen ran one of the mobile mills for several years and during this time he met his future wife, Jeanne Lee Bunch. Galen and Jeanne were united in marriage on April 1, 1968 at the Second Baptist Church in Lebanon, MO. To this union three children were born; two sons, Darrell Wayne Lindsey who died at birth and Thomas Jean Lindsey, and one daughter, Amy Lynn Lindsey. Galen and Jeanne purchased a 40 acre farm two weeks after they were married and that has been their home ever since, with the addition of a few more acres. Galen owned and operated several businesses through the years: Mister Ed’s Drive In, Lindsey Ready Mix Co., and Lindsey Concrete and Construction. He worked in the buildings trade for several years, taught carpentry class at the Vo-Tech, sold insurance, and ended his working career as a postal worker in Hermitage and Springfield. During all his working years, he still operated the farm which was what he loved most. He loved to work and loved a good challenge, you didn’t want to tell him you can’t do that, or it can’t be done, because he would be out to prove you wrong, and most of the time he did. Galen liked to fish and hunt, and in the mid 60’s, he was one of the few bowhunters around. He loved spending time with his children and especially the grandchildren after they came along. In 1999, due to an illness, he was forced to quit working at his job and devoted all his energy to the farm and cattle. Later in 2009 the effects of this same illness left him handicapped and in a wheelchair, but that didn’t stop him, it only slowed him down a little. Galen made a profession of faith at an early age, but would be quick to tell you he was gloriously saved at a much later date, and was always thankful God didn’t pay any attention to statistics or he would have been left out. He loved the Lord and his church and served in many positions through the years. God moved Galen and Jeanne to HFBC in 1993, where they grew to know and love the people, and serve God as he had planned. Galen was preceded in death by his parents, Wayne and Martha Jo Lindsey; a brother, Edde Wayne Lindsey; a sister, Vicky (Lindsey) Owsley; and an infant son, Darrell Wayne Lindsey. He leaves behind his wife Jeanne of the home; one son, Thomas Jean & wife Sable Lindsey; one daughter, Amy Lynn Lindsey; nine grandchildren, Ashley (Lindsey) Kimmerly & husband Steven, Jarret Lindsey, Blain & wife Victoria Lindsey, Shane Lindsey, Shaylee Lindsey, Troy Bostwick, Lindsey (Bostwick) Wadley & husband Matthew, Eric Bostwick, and Sonny Alseth; seven great-grandchildren, Zoe and Malachi Kimmerly, Mia, Easton and Cooper Wadley, John Bostwick, and Ryder Lindsey; two brothers, Randy & wife Janice Lindsey and Greg & wife Angie Lindsey; and two sisters, Valarie (Lindsey) Wallace & husband Mike and Deanna (Lindsey) Carter & husband Jeff. He also leaves seven nieces, ten nephews, and a host of other family and friends who will all truly miss him. Funeral services will be held at 2:00 p.m. on Tuesday, February 22, 2022 in the Hermitage First Baptist Church with Pastor Jeremy Hostetler officiating. Escorts will be Jarret Lindsey, Blain Lindsey, Shane Lindsey, Troy Bostwick, Eric Bostwick, and Sonny Alseth. Interment will be in the Bower Chapel Cemetery under the care and direction of the Cantlon-Otterness & Viets Funeral Home of Urbana. Visitation will be from 6:00-8:00 p.m. Monday at the Funeral Home. In lieu of flowers, the family requests donations be made to the Bower Chapel Cemetery.

Galen Dean Lindsey was born on May 6, 1947 in Urbana, MO. He was the second son of seven children born to Henry Wayne and Martha Jo (Edde) Lindsey. He passed away on Saturday, February 19, 2022 with his wife Jeanne by his side. At the... View Obituary & Service Information

The family of Galen Dean Lindsey created this Life Tributes page to make it easy to share your memories.

Send flowers to the Lindsey family.