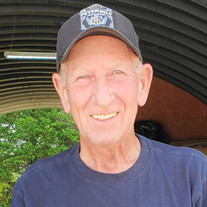 Gary “Dick” Dampier, son of the late Harry and Pauline (Berry) Dampier, was born on November 18, 1946 in Decatorville, MO and departed this life on Saturday, October 23, 2021 at Cox Hospital in Springfield, Missouri. At the time of his passing he was 74 years old. Dick was united in marriage to his beloved wife, Karen Ray (Kelsay) Dampier, on September 10, 1982. He spent his early life dairy farming. After that he drove trucks for Kraft, and eventually became the owner and operator of DKC Trucking in 1996. Dick loved the trucking industry and worked up until his passing. In his free time, Dick enjoyed sitting on the porch watching his Martins, playing pool, playing his guitar, fishing, working on semi-trucks, looking at antique cars, and spending some time at the casino. He was also a faithful member of Hopewell Freewill Baptist Church in Tunas, Missouri. Along with his church membership he was member of the Shriners. He also wrote and recorded religious songs and gave many tapes away. Giving hope and inspiration to many people. Dick was a loving husband, father, grandfather and friend. He cherished his family and touched the lives of everyone he encountered. Dick is preceded in death by his parents, Harry and Pauline Dampier; a grandchild, Cody Dampier; and three nephews, Eric Kjar, Sam Parrack, and David Canon. He is survived by his wife, Karen Dampier; six children, Gary Dampier & wife Doris, Andy Dampier & wife Jennifer, Michelle Wingo & husband Mike, Tony Dampier & wife Jamie, Angie Swearingin, and Cody Dampier; four sisters, Peggy & husband Harvey, Pat & husband Jerry, Betty & husband Red, and Dottie & husband David; two brothers, Bill & wife Brenda and Bobby J & wife Judy; 15 grandchildren; and eight great-grandchildren. Services will be held at 2:00 p.m. on Wednesday, October 27, 2021 under the care and direction of the Cantlon-Otterness & Viets Funeral Home in Urbana, Missouri. Visitation will be from 6:00-8:00 p.m. Tuesday at the Funeral Home located in Urbana. In lieu of flowers memorial donations can be made to the Mission Ridge Cemetery.

Gary &#8220;Dick&#8221; Dampier, son of the late Harry and Pauline (Berry) Dampier, was born on November 18, 1946 in Decatorville, MO and departed this life on Saturday, October 23, 2021 at Cox Hospital in Springfield, Missouri. At the time... View Obituary & Service Information

The family of Gary Dick Dampier created this Life Tributes page to make it easy to share your memories.

Send flowers to the Dampier family.