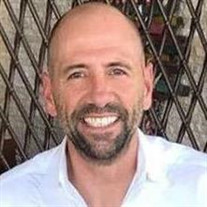 Gary Henderson Dill was born April 13, 1965 and he departed this earth on July 2, 2019. Gary’s parents were Loren Dale and Kathleen Dill and Gary was the 4th of 5 children. He was raised on the family farm in Elkland, Missouri. He had an amazing childhood, milking with his dad, eating cheeseburgers and often causing trouble with his brother Jeff. He cherished those childhood memories so very much. He grew up wanting to be a dairy farmer just like his dad. After high school he attended North Arkansas Community College, the School of the Ozarks, and eventually earned a Masters Degree from Drury University in Springfield, Mo. He spent his professional career with State Farm Insurance, working in various roles and living in Missouri, Texas and New York. His true love, however, was always the farm he kept in Dallas County Missouri. He loved everything about Dallas County and in the last 3 years he spent a considerable amount of time at his farm working with his son, Stuart. Gary loved running, traveling, floating the river, and sharing a glass of wine with friends. More than anything, he loved spending time with his 3 children, Stuart, Ashley and Alyssa. Gary was always full of energy, ready for adventure and he loved a good challenge. Gary was preceded in death by his father, Loren Dale Dill. He is survived by his mother Kathleen Dill of Elkland, Missouri; his 4 siblings - Joyce and Bill Cahow of Elkland; Charlie and Dixie Dill of Elkland; Jeff Dill of Plantation, FL and Mike Dill of Franklin, Pa; Gary’s beloved children, Stuart and Kayla Dill of Long Lane, Missouri; Ashley and Becca Russell of Springfield, Missouri and Alyssa Dill and her fiancé Tony Christopher of Wayne, New Jersey and numerous nieces and nephews also survive. He spent the last days of his life, running, feeding cows and driving around with his grand-dog Jessie. He will be dearly missed. Services will be held 11am, July 10, 2019 at Pisgah Baptist Church in Long Lane, MO. In lieu of flowers the family ask donations be made to the Pisgah Baptist Church Building Fund. Services are under the direction of the Cantlon Otterness & Viets Funeral Home of Buffalo Visitation will be from 5:00 to 7:00 p.m. Tuesday July 9, 2019 in the Cantlon Otterness & Viets Funeral Home in Buffalo, Missouri

Gary Henderson Dill was born April 13, 1965 and he departed this earth on July 2, 2019. Gary&#8217;s parents were Loren Dale and Kathleen Dill and Gary was the 4th of 5 children. He was raised on the family farm in Elkland, Missouri. He had... View Obituary & Service Information

The family of Mr. Gary Henderson Dill created this Life Tributes page to make it easy to share your memories.