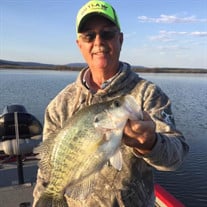 Gary Lee Turner, 66, of Long Lane, MO passed away in his home on Monday, November 23, 2020 after a yearlong battle with brain cancer. Gary was born in Buffalo, MO on December 20, 1953 to Bertram and Hazel Turner. He was one of five siblings. Gary was saved at a young age at a Brush Arbor Revival. Gary lived in this area all his life, graduating from Buffalo High School in 1971. He married the love of his life, Janet (Sturdevant) on May 31, 1974. They had two daughters, Janelle (Turner) Reed and Michelle (Turner) Bradford. Both Gary and Janet worked at Zenith for over 20 years before the plant closed down. Gary then went into business for himself building houses and later doing handyman work. He retired in 2015 so he could do more with the other love of his life...fishing. Gary never met a stranger and was always willing to help a friend out. He never shied away from hard work whether that was cutting wood each year, tending his garden, or keeping up on his farmhouse. Over the years, Gary got to go fishing in various states with lots of good buddies. He treasured those moments and the stories he told of each of those trips will be remembered by all. Gary was preceded in death by his father, Bertram Turner; his father and mother-in-law, Raymond and Rebecca Sturdevant; and several aunts and uncles. He leaves behind his wife of 46 years, Janet; his daughters, Janelle Reed of Ozark, MO and Michelle and son-in-law Chase Bradford of Long Lane, MO; his mother, Hazel Turner of Buffalo, MO; grandchildren, Madison and Kassidy Reed of Ozark, MO and Dylan, Delaney and Daylee Bradford of Long Lane, MO; three brothers, Larry & wife Lib of Bolivar, MO, Terry & wife Sherry of Buffalo, MO, and Jimmy & wife Karen of Buffalo, MO; one sister, Linda Prim & husband Bobby of Lowell, AR; and two sisters-in-law, Pat Elam and Carolyn Evans both of Windyville, MO. He also leaves Brian Reed, who was loved like a son along with a multitude of family, friends, and neighbors who will miss him dearly. Funeral services will be held at 10:00 a.m. on Saturday, November 28, 2020 in the Cantlon-Otterness & Viets Funeral Home with Bro. Bill Autry officiating. Escorts will be Dean Cline, Eric Gronniger, Mike Lewis, Jr. Oldham, David Phillips, Brian Reed, and Doug Smith. Honorary escorts will be David Kramer and Larry Ross. Interment will be in the Bethel Cemetery under the care and direction of the Cantlon-Otterness & Viets Funeral Home of Buffalo. Visitation will be from 6:00-8:00 p.m. Friday at the Funeral Home. In lieu of flowers, donations can be made in Gary's behalf to Bethel Cemetery Fund c/o O’Bannon Bank, PO Box 890 Buffalo, MO 65622, ATTN: Mary Hitchings.

Gary Lee Turner, 66, of Long Lane, MO passed away in his home on Monday, November 23, 2020 after a yearlong battle with brain cancer. Gary was born in Buffalo, MO on December 20, 1953 to Bertram and Hazel Turner. He was one of five... View Obituary & Service Information

The family of Gary Lee Turner created this Life Tributes page to make it easy to share your memories.

Send flowers to the Turner family.