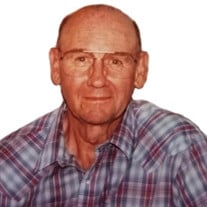 Gene Herbert LeRoy Janke Jr. was born March 11,1931 in Hartford City, Indiana the only child of Gene Janke Sr and Katherine Elizabeth Jacobs. Gene began his schooling in Indiana and graduated from high school in Lewisburg Ohio in 1949. He joined the Marines that same year and began his basic training at Parris island, SC then reported for specialized training at Camp Pendleton, CA. Shortly before being shipped out from there he met his future bride, Ila Simonds. It was love at first sight. He served in the Korean War as a Radio Operator/Mechanic. He was honorably discharged in December 1953 as a Staff Sergeant. Upon returning home, he proposed to Ila. They were married April 16, 1954. After serving his country he attended school and received his certification as a journeyman plumber working in the San Diego-El Cajon areas. They moved to Missouri in 1960, where he and Ila purchased a dairy farm in the Spring Grove community. Following that he drove trucks locally and cross country for 30 years. He also drove for four years for the US Postal Service. Unfortunately, Gene suffered a stroke in May 1998 and never able was to drive again. Over the years he enjoyed motorcycle racing, traveling, camping and boating at the lake and time with his family, Gene was preceded in death by his parents, Katherine and Gene Janke Sr.; granddaughter, Joni Brownfield; sister-in-law and husband Faye and Ed Byron; step-father, Herbert Snodgrass; step-brother, Delbert Snodgrass; and sister-in-law, Marian Simonds. He is survived by his wife Ila of the home; his children, Sandy & husband Duane George of Tulsa, OK, Nancy & husband Terry Ewing of Thornfield, MO, Ronald Janke and Melissa Cordell Janke of Long Lane, MO and John & wife Missie of Macks Creek, MO; his grandchildren, Joshua Brownfield, Travis Ewing & wife Stefanie, Kristen Janke Henning & husband Nick, Tyler Janke & wife Lakin; two step-grandsons, Chris and John George and their families; two great-grandchildren, Joel Henning and Isabella Ewing; brother-in-law Harold Simonds of Seal Beach, CA; step-sister Rosemary & husband Bob Sandwell of Elkland, MO; step-brother’s wife, Joanne Snodgrass of Lockwood, MO. He also had numerous nieces and nephews, friends and his Charity Christian Church family. Funeral services will be conducted at 2:00 p.m. on Saturday, October 6, 2018 in the Cantlon Otterness & Viets Chapel with Bro. David Stotts officiating. Escorts will be Ronald Janke, John Janke, Bert Dunham, Tyler Janke, Travis Ewing, and Josh Brownfield. Honorary Escorts will be Terry Ewing, Duane George, LeRoy Perry, and Nick Henning. Music will be provided by Kim Hendrix and Dianne Cowden, and Tammy Atteberry, Pianist. Interment will be in the Memorial Gardens of Memory Cemetery under the direction of the Cantlon Otterness & Viets Funeral Home of Buffalo. Visitation will be from 6:00-8:00 p.m. Friday at the Funeral Home. In lieu of flowers, the family requests donations be made to the Charity Christian Church.

The family of Mr. Gene Herbert Janke created this Life Tributes page to make it easy to share your memories.

Send flowers to the Janke family.