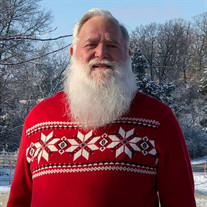 George Anthony “Bear” Walker, son of the late George Alexander and Valerie (Glaub) Walker, was born on December 15, 1949 in Centerville, IA, and departed this life on August 5, 2018 at his home near Elkland, MO. At the time of his passing he was 68 years, seven months, and 19 days of age. Bear served his country proudly as a United States Marine during the Vietnam War. After his service he went to work to support his family. He was a very hardworking man, but always made time for his family and friends. He had a great sense of humor and loved to play Santa Clause every year. He loved his wife Lynette and helped take care of her parents in their later years as their health failed. He also enjoyed fishing, gardening, and loving on his little dog sweet pea. Bear was preceded in death by his parents and two sisters, Sandra Ladner and Valerie Harmon. He is survived by his wife Lynette of the home; one son, Terry Walker of Arcata, CA; two daughters, Laurie & husband Scott Watkins of Grants Pass, OR and Ashley Welsh of Charleston, SC; three brothers, Jim & wife Glenda Walker of Lebanon, MO, Bill & wife Leanne Walker of Buffalo, MO, and Joe Walker of MO; two sister, Debbie & husband Alan Wilson of Gulfport, MS and Mary Beth Hartley of Gulfport, MS; six grandchildren; and two great-grandchildren. He also leaves other family members and many friends who will all truly miss him. Funeral services will be conducted at 12:00 p.m. on Saturday, August 11, 2018 in the Cantlon Otterness & Viets Chapel. Escorts will be Jim Walker, Jr., Mike Walker, Boomer Walker, Terry Shipley, Kevin Shipley, and Dwayne Shipley. Interment will be in the Mt. Olive Cemetery under the direction of the Cantlon Otterness & Viets Funeral Home of Buffalo. Visitation will be from 11:00-12:00 p.m. Saturday at the Funeral Home. In lieu of flowers, the family requests that donations be made to the Veteran’s Organization of the donor’s choice.

The family of George Anthony "Bear" Walker created this Life Tributes page to make it easy to share your memories.

Send flowers to the Walker family.