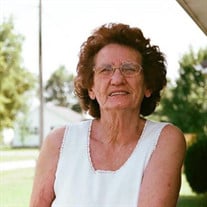 Gladys J. Henderson, daughter of the late Joel Allen and Nancy E. (Moore) Lowery was born on April 18, 1928 in Gadsden, AL, and departed this life on November 8, 2018 at her home in Nixa, MO. At the time of her passing she was 90 years, 7 months, and 19 days of age. Gladys was reared and attended school in Ashville, AL. She enlisted in the United States Army and proudly served her country. While she was stationed in Okinawa, Japan she met Daren Henderson. They were united in marriage upon their return to the states, and to this union five children were born, all of whom survive her. They made their home in Alabama and California before settling in Missouri. Gladys enjoyed playing bingo and going to the casinos to play the slot machines. She was a devoted mother and loved her children, grandchildren, and great-grandchildren. She was a member of the Gum Springs Baptist Church in Alabama. Gladys was preceded in death by her husband Daren; her parents; two brothers, Guy Lowery and Marion Lowery; and five sisters, Creasy Burton, Thelma Fails, Estail Brannon, Grace Reeves, and Betty Lafoe. She is survived by her children, Dan Henderson of Buffalo, MO, Phyllis Henderson of Nixa, MO, Donna Baker of Buffalo, MO, Cynthia DeAngelo of Virginia Beach, VA, and Nancy Carlisle of Talladega, AL; eight grandchildren; and 11 great-grandchildren. She also leaves other family members and many friends who will all truly miss her. Funeral services will be conducted at 1:30 p.m. on Sunday, November 11, 2018 in the Cantlon Otterness & Viets Funeral Chapel with Chaplain Anne Cheffey officiating. Escorts will be Brandon Rodelander, Ryan Phillips, Shawn Covert, Dan Shaver, Eric Colley, and Justin Colley. Honorary escort will be Dan Henderson. Interment will be in the New Hope Cemetery near Louisburg, MO under the direction of the Cantlon Otterness & Viets Funeral Home of Buffalo. Visitation will be from 5:00-7:00 p.m. Saturday at the Funeral Home. In lieu of flowers, the family requests donations be made to the St. Jude Children’s Hospital.

Gladys J. Henderson, daughter of the late Joel Allen and Nancy E. (Moore) Lowery was born on April 18, 1928 in Gadsden, AL, and departed this life on November 8, 2018 at her home in Nixa, MO. At the time of her passing she was 90 years,... View Obituary & Service Information

The family of Mrs. Gladys J. Henderson created this Life Tributes page to make it easy to share your memories.

Send flowers to the Henderson family.