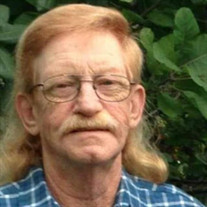 Harold Dee “Ike” Ikerd was born on February 18, 1949 to Adron Jackson Ikerd and Jewell Marie (Seamster) Ikerd, in Bolivar, Missouri, and departed this life on March 21, 2020, at his home in Buffalo, Missouri, at the age of 71. Ike was reared in Bolivar, Missouri, and graduated from Bolivar High School. He was united in marriage to Roberta Austin Neitzert on September 29, 1989, in Bolivar, Missouri. Ike was a member of New Hope Baptist Church where he had attended for 30 years. He delivered papers in Bolivar at the age of ten for $4.75 a week, including 7 days of deliveries. He also loved to bowl. He bowled for 30 years at Buffalo Bowl, but his love began at the age of 14 when he set pins manually at Bolivar Bowl at the age of 14. He joined the army in 1971 and served through 1973 in Germany as a combat medic during the Vietnam era. He was a master gunsmith with Ozark Mountain Arms - Silver Dollar City Shooting Demonstrator. He ran Mutton Hollow gun shop and James River Trading Company. Ike loved working at Bass Pro in Springfield, Missouri at the gun counter, shooting range, and as a product specialist. This is where he had the opportunity to meet President Jimmy Carter and Vice-President Dick Chaney. He taught Hunter Education for 32 years and won the Missouri Instructor of the Year for 1994 and 1996. He certified more than ten thousand students and was awarded the Distinguished Service Award in 2011 from the Missouri Department of Conservation. Ike enjoyed participating in rendezvous and outdoor plays where he frequently exhibited a collection of primitive goods. He was a member of the Buffalo Rural Fire Department as a firefighter and Assistant Chief. He had also served with the Louisburg Fire Department as Chief and security officer, and for a while was a member of the Bolivar, Nixa, and Wheatland Fire Departments. He was a member of the Dallas Co. Sheriff’s Posse for 15 years and a 911 dispatcher for 9 months. He made many of the 911 signs for Dallas County. He is preceded in death by his parents, a brother Adron Jackson Ikerd, a son Steven Thomas Jackson Ikerd, and a grandson Dakota Lee Moore. Ike is survived by his wife, Roberta, of the home; two sisters, Ada Ikerd Sikes and LInda Jones Allred; his children James Moore, Kami Coltrin, and husband Brandon, and Kriston Neitzert; and grandchildren James Jr. Moore, Austin Moore, Damion Coltrin, Devon Coltrin, Kayla Coltrin, and Deegan Coltrin. He leaves many family members, nieces, nephews, Fire Department Family, Church Family, Classmates, and neighbors as he had never seen a stranger and will be missed by all. Graveside services will be 10:30 am Thursday, March 26, 2020 in the New Hope Cemetery in Louisburg, Missouri with Jason Wendlandt officiating. Burial will follow under the direction of the Cantlon-Otterness & Viets Funeral Home of Buffalo. In lieu of flowers memorials may be made to the Buffalo Rural Fire Department.

The family of Mr. Harold Dee "Ike" Ikerd created this Life Tributes page to make it easy to share your memories.

Send flowers to the Ikerd family.