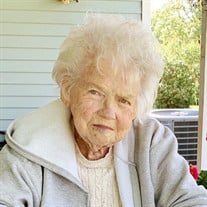 Helen Marie{Kerschbaum}Crowder died peacefully at home surrounded by her loving family on June 10, 2019. We will celebrate her life on Wednesday, June 12 from 6-8 pm at Cantlon Otterness & Viets Funeral Home in Buffalo, MO. There will be a Funeral... View Obituary & Service Information

The family of Mrs. Helen Marie Crowder created this Life Tributes page to make it easy to share your memories.

Send flowers to the Crowder family.