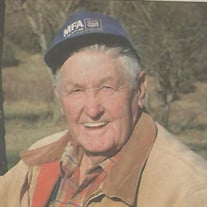 Herbert Ray Mallard, son of the late Earl and Chloe (Ray) Mallard was born on August 7, 1928 in Elkland, MO and departed this life on December 8, 2020 in Buffalo, MO, at the age of 92 years and four months. Herbert was raised and attended school at Elkland, MO. In 1945 he joined the US Marines and served proudly in the Marine Air Corp in Hawaii. After his discharge from El Toro Naval Air Station, he was reunited with his high school sweetheart, Claudia Williams. They were united in marriage on March 19, 1949 in Upland, California and to this union two children were born. The family moved back to Missouri in September of 1966 where he began his dream of farming. The family operated a dairy and beef cattle farm near Charity until retiring in 2010. Herbert was a lifelong member of the Southern Baptists and was a devoted man of Christ. He was an ordained deacon at Mt. Pleasant Southern Baptist Church and spent his life serving the Christian community. Herbert was preceded in death by his parents; two brothers, Quinton Mallard and Robert Mallard; and one sister, Effie Lou Mathews. He is survived by his wife Claudia of Buffalo, MO; his daughter, Cheryl & husband Doug Gardner of Buffalo, MO; his son, Steve Mallard & wife Kim of Fair Grove, MO; one brother, Ray Mallard Triplett of Lynnwood, WA; and one sister, Peggy Litke of Wichita, KS. He also leaves many nieces, nephews, cousins, other family members, and many friends who will all truly miss him. Visitation will be this Saturday, Dececember 12, from 3:00-6:00 p.m. at the Cantlon-Otterness & Viets Funeral Home in Buffalo. Graveside services will be conducted at 2:00 p.m. on Sunday, December 13, 2020 in the Thorpe Cemetery with Pastor Cliff Long officiating. In lieu of flowers, the family requests donations be made to the Thorpe Cemetery.

Herbert Ray Mallard, son of the late Earl and Chloe (Ray) Mallard was born on August 7, 1928 in Elkland, MO and departed this life on December 8, 2020 in Buffalo, MO, at the age of 92 years and four months. Herbert was raised and... View Obituary & Service Information

The family of Herbert Ray Mallard created this Life Tributes page to make it easy to share your memories.

Send flowers to the Mallard family.