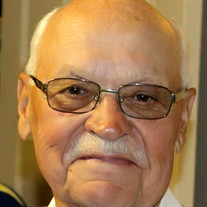 Herschel Eugene “Sonny” Megown 01-16-1936 – 02-20-2019 Cremation rites were accorded by the Cantlon Otterness and Viets Funeral Home of Buffalo, Mo. Sonny’s request for a private family celebration of life will be held at a later date. Herschel Eugene Megown, known as “Sonny” by family and friends, left his earthly home with loved ones by his side after a courageous fight with pancreatic cancer. Sonny was the eldest child born to Herschel Harden and Ettie Marie (Adkisson) Megown in Renick, Mo. He spent his childhood in Renick and Centralia where he obtained his high school education. He and his three siblings were reared during hard times, but there was always lots of love and good times shared with many aunts, uncles, cousins, and friends. In the 1950’s Sonny began his working career for Barnett Plumbing in Mexico, Mo. He served his apprenticeship working with his uncle George “Junior” Adkisson. He married in 1954 to Margorie Louise “Skippy” Wilson and became the devoted father to three daughters, Kathy Sue, Jeri Lynn, and Marianne. His oldest daughter Kathy Sue had a genetic syndrome, later diagnosed as Prader-Willi Syndrome. Kathy required special attention and patience and Sonny was so devoted to helping and sharing special time with her. In 1961, Sonny and his young family moved to Jefferson City where he began, his professional career working for Dawson Plumbing. Then in 1971 he joined Harold G. Butzer Mechanical Engineering Company. During his tenure there as Project Manager, he managed many large commercial and industrial projects around the state; Ft. Leonard Wood Army Base, Whiteman Air Force Base, and Missouri Penitentiary, Truman State Office Building, St Mary’s and Still Hospitals in Jefferson City, and Tan Tara-Resort, and Lake Ozark to name only a few. Sonny was a proud member with United Association of Journey Plumber #562 for over 58 years. Through the Years Sonny received many awards of excellence for work he managed. In 1990 Sonny married Carolyn (Tucker) Lindsey. They made their home in Jefferson City until he retired in 1998. At that time, they moved to Buffalo, Mo. They enjoyed their time camping and riding horses. Together they traveled with their horses to many states and made many lasting friendships. Through the years Sonny was an avid hunter, fisherman and loved boating at Lake of the Ozarks. He made 25+ trips to Colorado to elk, deer, and bear hunt. After all of those hunting trips, he mentioned several times that taking his own horse and riding the mountains and meadows in summer was like seeing it again for the first time. Sonny was preceded in death by his parents, many aunts and uncles, his beloved Kathy Sue and a good friend and brother-in-law Bill Davidson of Centralia. Herschel E. Megown is survived by wife Carolyn of Buffalo, his two daughters Marianne (Tommy) Picone, Wilmington, NC, Jeri Lynn James and step-son Christopher (Laura) Lindsey both from Jefferson City. His Siblings Dorothy Davidson and Rita (Larry) Jones both from Centralia and his brother Larry (Kaye) Megown of Hot Springs Village AR. Three grandchildren: Timothy (Kristen) Briggs, Mari Kristen (Justin) Jones, and Morgan Lindsey and three great-grandchildren, in addition to many nieces, and nephews. In lieu of flowers memorials may be sent to Wonderland Camp, 18591 Miller Circle, Rocky Mount, Mo 65072 www.wonderlandcamp.org. Sonny will be greatly missed by his loving, family, longtime friends and co-workers that were so special to him.

The family of Mr. Herschel Eugene "Sonny" Megown created this Life Tributes page to make it easy to share your memories.

Send flowers to the Megown family.