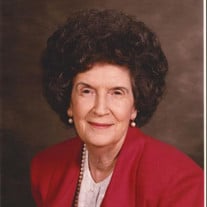 Ina Marie Chapman was born to Norman H. and Essie Maude (Presley) Berry on January 29, 1925 in Alabam, AR. She was one of three children. Her brother Grady Horner Berry was nine and a half years older, and her sister Norma Jean (Berry) Chapman was nine years younger. Ina departed this life on April 7, 2021 at the age of 96 years, 2 months, and 9 days. The Berry family relocated to Fullerton, CA during the Great Depression. Upon graduating from Fullerton High School, Ina started working in an orange packing house until she met Harold Eugene Chapman. They were married on May 29, 1944 after he was discharged from the Coast Guard. Harold brought his bride back home to Buffalo, MO where they lived the remainder of their lives. To this union two children were born. Linda Jean and Harold “Hal” Eugene Jr. While living in Buffalo, Harold and Ina were members of the First Baptist Church and were involved with many areas of the church development, including teaching Sunday School. Ina loved the Lord and developed a heart for missions. She was the Women’s Missionary Union (WMU) president at the local church level for many years and belonged to and led a mission focus group which was instrumental iv creating mission awareness an carrying out local outreach projects. Ina devoted her life to missions at home and internationally. She knew how important it was to spread the gospel to all. Besides the church work she was involved with, Ina was always at the Chapman’s Furniture Store that Harold owned and operated. Even after Harold passed away, she always came to work early and opened the doors, turned on the lights and made a pot of coffee. That was the time when she would check her church calendar and send get well, birthday or anniversary cards to church family, friends and loved ones, which was definitely a priority during her lifetime. Harold and Ina had great love for and a devotion to their family and nowhere was this more evident than at family dinners and birthday celebrations. Her great-grandchildren called her “Great Ina” and in their world she was great! She is survived by her two children, Linda Jean (Mickey) McGuire and Hal Eugene (Mary Ellen) Chapman Jr., one sister, Norma Jean Chapman, eight grandchildren, Mickey Joe McGuire, Lora (James) Ashworth, Marty McGuire, Mark McGuire, Lacey McGuire, Natalie (Thomas) Knotts, Sara (Dustin) Smith, Hayley Chapman, fourteen great-grandchildren, three great-great-grandchildren and other family members and friends who will all truly miss her. Visitation will be from 6:00 – 8:00pm, April 9, 2021 at Cantlon-Otterness and Viets Funeral Home in Buffalo, MO. Services are at 2:00pm on April 10, 2021 at Cantlon-Otterness and Viets Funeral Home in Buffalo, MO with Dr. Russell Adams, and Dr. Douglas Earls officiating. Escorts will be James Ashworth, Thomas Knotts, Mickey Joe McGuire, Marty McGuire, Mark McGuire, and Dustin Smith. Interment will be in Maple Lawn Cemetery. In lieu of flowers, donations may be made to the Annie Armstrong Easter Offering or the Lottie Moon Christmas Offering.

Ina Marie Chapman was born to Norman H. and Essie Maude (Presley) Berry on January 29, 1925 in Alabam, AR. She was one of three children. Her brother Grady Horner Berry was nine and a half years older, and her sister Norma Jean (Berry) Chapman... View Obituary & Service Information

The family of Ina Marie Chapman created this Life Tributes page to make it easy to share your memories.

Send flowers to the Chapman family.