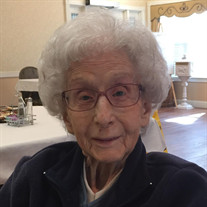 Irene Jewell (Holloway) Harrold passed away on October 18, 2018 in Springfield, MO at the age of 93 years and 11 months.  Irene was born November 7, 1924 in Buffalo, MO to Vern and Jewell (Mathis) Holloway.     Irene was raised on a farm just west of Buffalo in the Reynolds community and went to school at Crescent grade school and graduated from Buffalo High School in 1942. She and her sister Nadine had many adventures traveling up and down the Lindley River and attending Reynolds Chapel Missionary Baptist Church.       Irene was united in marriage to William “Tennis” Harrold on December 24, 1947 and they had two children, Linda and Larry.  Irene and Tennis started a Moving Company in Oxnard, CA and expanded the business through other parts of California. Irene was very active in the Camarillo Christian Church where she started a Sunday School Class for the Mentally Handicapped children. She started out with two children and when the word spread through town that there was a class for children with handicaps, the class grew to over 15 children of all ages. Irene always felt this was one of her greatest accomplishment.     Tennis and Irene retired to Buffalo, MO where they had a dairy farm for several years. After selling the farm they moved to Springfield, MO where they enjoyed retirement until purchasing a Truck Stop in Bolivar, MO where they enjoyed meeting and visiting with people. In later years, Tennis and Irene finally settled down and enjoyed traveling throughout the county.     Irene was an avid Cardinal Fan, whereas Tennis was an “A’s” which made for interesting sport conversations.     Irene is preceded in death by her parents; her husband, W. Tennis Harrold; sister, Nadine Whitehead; grandson, Matthew Harrold; and cousin, Virginia Alice Welker, one of her best talking buddies.  She is survived by her daughter Linda K. Bake of Cody WY; son, Larry Harrold of Springfield, MO; grandson, Shane Roudybush of Ash Grove; and great-granddaughter, Asislynne Sky Allen Harrold, Springfield MO.  She also leaves her nephews Robert W. Baker, Dean Baker of California, Van Harrold of Kansas, special cousins Ida May Swanigan, Pauline Bunger and the wonderful friends and staff at Lakewood Assisted Living.     Funeral services will be conducted at 2:00 p.m. on Wednesday, October 24, 2018 at the Cantlon Otterness & Viets Funeral Home with Chaplain Dennis Franck officiating.  Escorts will be George Bunger, Shane Roudybush, Robert Collins, Russell Parker, J.D. Weiser, Richard Henderson, and Randy Miller. Interment will be in the Reynolds Chapel Cemetery under the direction of the Cantlon Otterness & Viets Funeral Home of Buffalo.  Visitation will be from 6:00-8:00 p.m. Tuesday at the Funeral Home. In lieu of flowers donations could be made to the Reynolds Chapel Cemetery or the Masonic Outreach Programs of Missouri and California.

Irene Jewell (Holloway) Harrold passed away on October 18, 2018 in Springfield, MO at the age of 93 years and 11 months.  Irene was born November 7, 1924 in Buffalo, MO to Vern and Jewell (Mathis) Holloway.     Irene was raised on a farm... View Obituary & Service Information

The family of Mrs. Irene Jewel Harrold created this Life Tributes page to make it easy to share your memories.

Send flowers to the Harrold family.