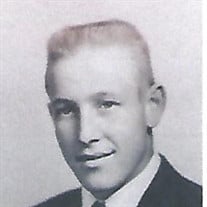 Celebration of life memorial service to be announced later. Cremation rites were accorded by Cantlon-Otterness & Viets Funeral Home in Buffalo. Memorials can be made to Prairie Chapel Food Pantry. James Richard Brown, 84 was born January 30, 1936 in Alton, Illinois, the son of James Curtis and Mabel Harriet (Green) Brown. He died June 14, 2020 in his home in Urbana, Missouri He graduated from Roxana Community High School where he was a three-sport athlete. He received the Alton Telegraph Basketball Player of the year award in his senior year. On October 5, 1955 he was united in marriage to Elizabeth Ann Arnold. They divorced in 1972. Upon graduation from high school he enlisted in the US Navy where he served for 20 and a half years. Upon retirement he returned to Illinois and worked for McDonnell-Douglas in St. Louis again retiring after 16 years. He moved to Urbana, Missouri where he purchased a farm. He thoroughly enjoyed the outdoor life and raising registered Limousin cattle. In 1995 he married Mary Lou Broadway, a high school sweetheart and life-long friend. Jim was a charter member of Prairie Chapel United Methodist Church and served in several positions including Manager of the Food Pantry for several years. He served on the Board of Directors of the Urbana Rural Fire Department for many years. His philosophy for retirement was “Give back to the community.” Jim was preceded in death by his parents; his wife: Mary Lou; three sisters: Mabel Jean Brown, Anita Sunderland, Aileen Winterrowd, and a brother Robert. Survivors include: a son, James R. Jr., Red Bluff, California; two daughters: Tami Sloan, Scottsdale Arizona, Jami Rice, Urbana, Missouri; three stepsons: David (Jennifer) Zimmerman, Jerseyville, Illinois, Dennis (Sue) Zimmerman, Cincinnati, Ohio and Darin (Jennifer) McCall, Louisville, Kentucky; on stepdaughter: Cindy (Jeff) Valentino, Clovis, California; eight grandchildren, Multitudes of great grandchildren and many nieces and nephews and a host of other relatives and many friends.

The family of Mr. James Richard (Jim) Brown created this Life Tributes page to make it easy to share your memories.

Celebration of life memorial service to be announced later. Cremation...

Send flowers to the Brown family.